Decorating a Barsati in Delhi

The Barsati,  a small rooftop abode, is a characteristic feature of  residential architecture in Delhi  from an older period. The word Barsati comes from the Hindi word Barsat, meaning  rain &  refers to a  room built on the roof of a house that covers approximately  a third  of the total floor area. Typically used as a store room or as living quarters for  domestic help, the Barsati is  from a period when the Delhi skyline was low lying and open spaces aplenty. Back then it  was also   an affordable rental housing option for young professionals, artists and intellectuals. The past decade however, has brought a change in planning laws resulting in  older houses giving way to apartments and taking  with them the Barsati.

On my first job in Delhi,  whilst searching for a house to rent,  I remember seeing several Barsatis,  each one more unique than the other, every one  of them offering innumerable  design possibilities. Many of the Barsatis I was shown,  touched  the tops of Gulmohar, Mango, Jamun or Neem trees, were filled with plants and had the odd charpoy, swing or mooda placed  to soak in the winter sun.  They took one back to a time when it was common  to live a more natural lifestyle and also safe  to sleep on the terrace in the summer. Recently on a studio hunt, I found to my dismay that many of the characterful older houses I’d once seen had been converted into repetitive apartment blocks built wall to wall. Of the older houses that still had Barsatis, many were converted into trendy designer roof top  residences.  The old Barsati’s  with their  distinctive laid back charm and natural style were gone and so was much of the  romance associated with them.

The Barsati featured here was rented by a friend and while it wasn’t a project,  I helped him decorate it over a span of around a year.  He was a  young American who worked in the social justice sector, travelling extensively across rural India on work. This gave him access to the fine indigenous  art, handloom and block prints that were used to decorate the space. 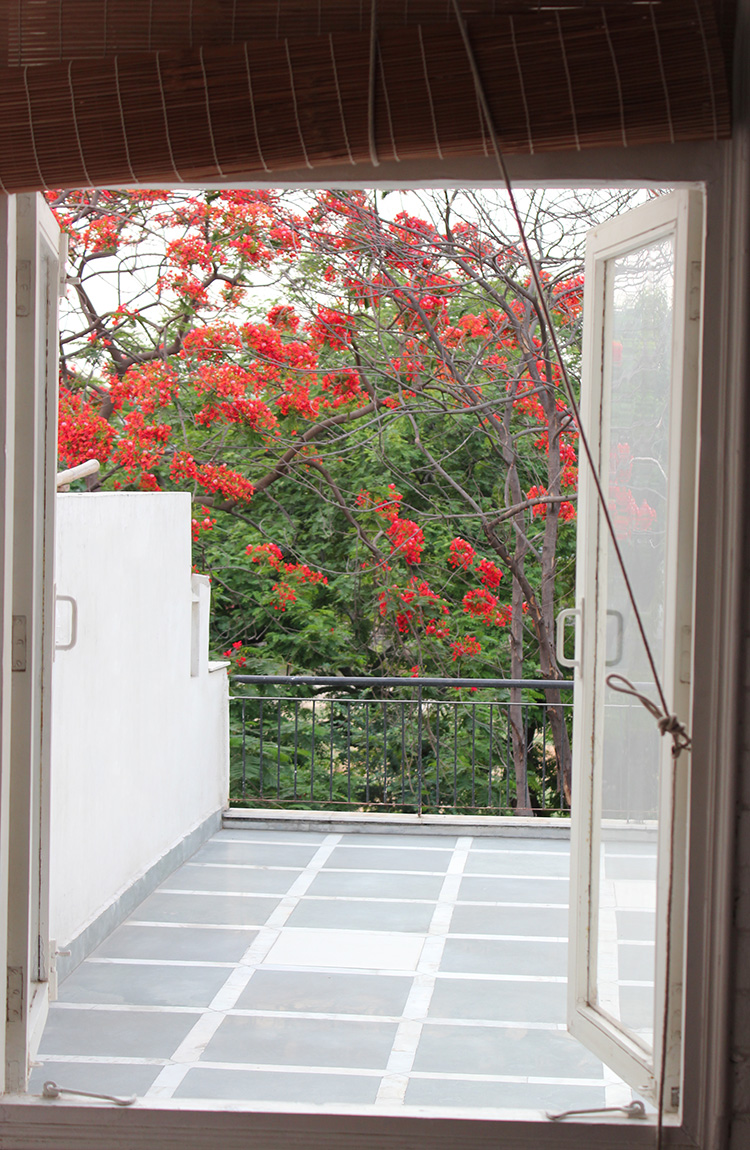 This Barsati had just enough space for a couple. The terrace, as is common is the Barsati, was larger than the covered area  and  overlooked a pair of Gulmohar trees and a park. 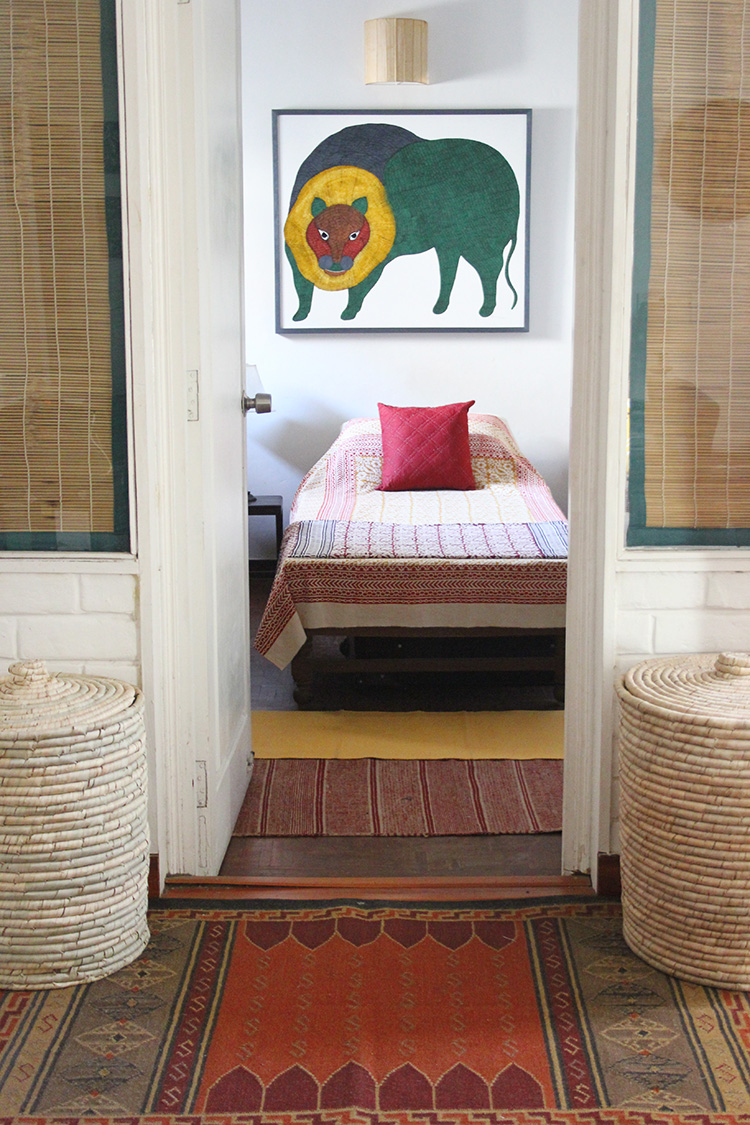 This was the entrance to the first of the two bedrooms in the Barsati.  The large Gond art piece was a find at the annual Dastkar handicrafts bazaar in Delhi. The chick blinds were locally made, the handloom bedspread was sourced from SEWA

This old bench was about to be handed over to the Kabaadi (scrap dealer) by my friend’s landlord, until he recused, polished and re-caned it. It fit comfortably in the small living room. 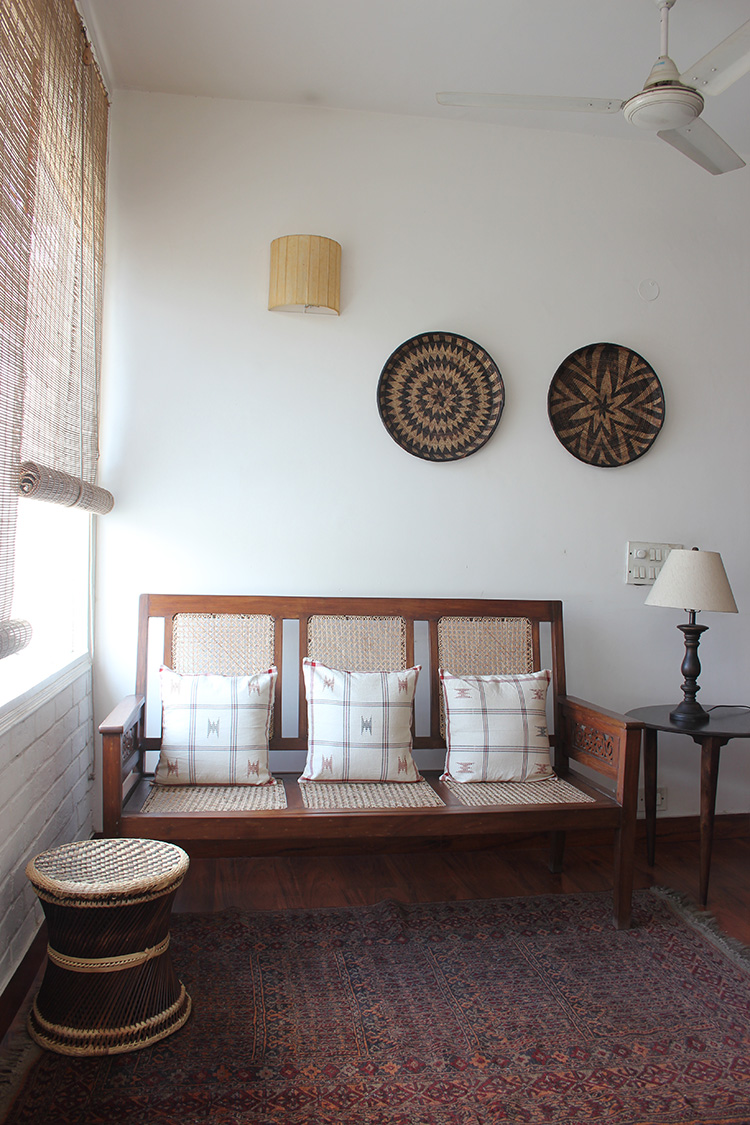 Here’s another picture of the rescued bench surrounded by two woven baskets from the Philippines, a lamp found at a scrap market in Delhi, locally made chik-blinds that are indispensable for the Delhi weather, a handwoven carpet and a hand woven mooda. This room  had large, openable windows that over looked the terrace and the  Gulmohar trees. It  was a lovely space to enjoy  the evenings or cooler days from 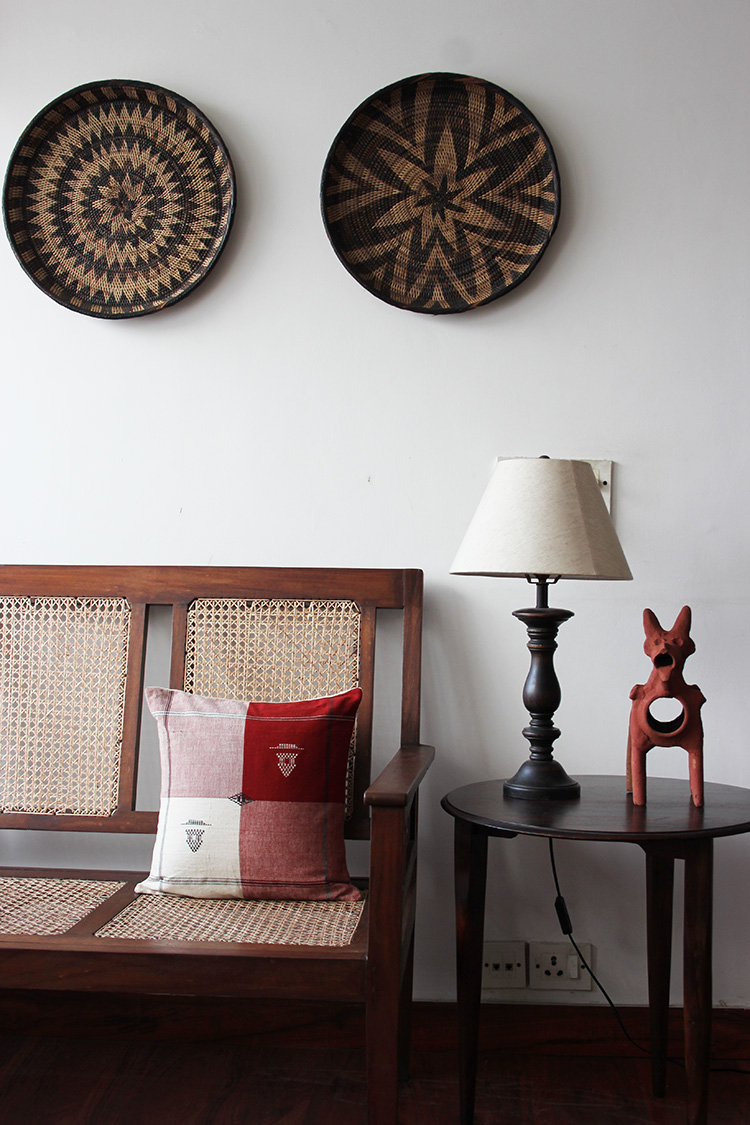 The textures that dominated this space were natural – cottons, grasses, cane, art  painted with natural pigments. They’d been collected over time by my friend who often travelled extensively to remote rural corners of India on his work 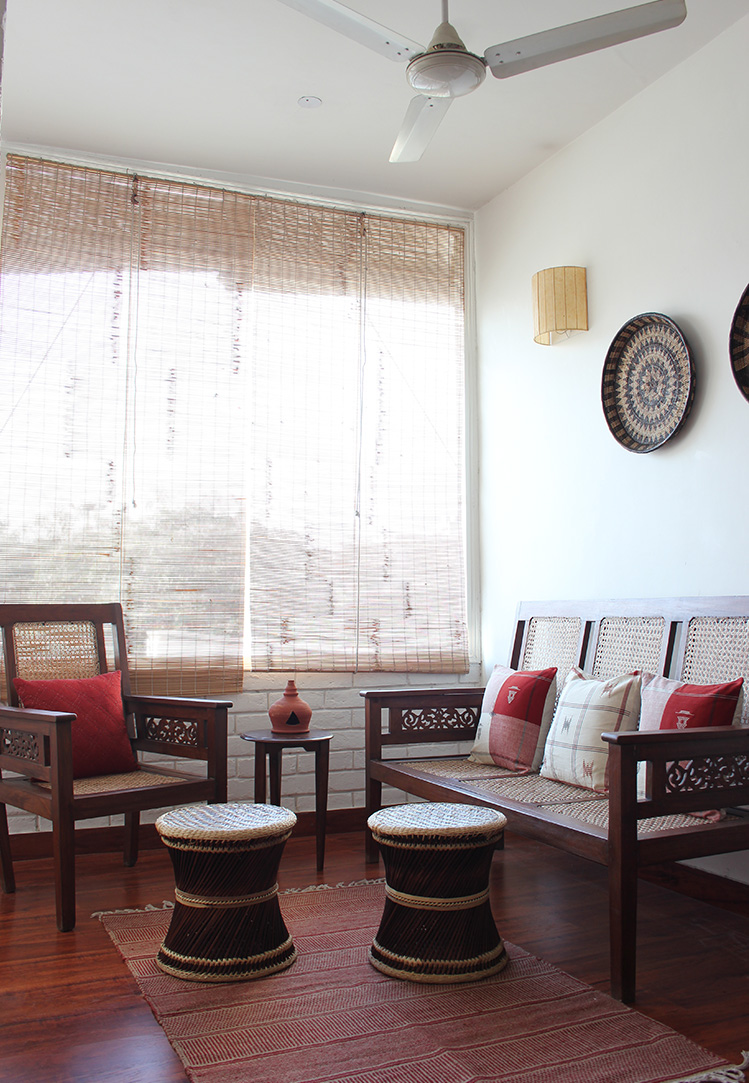 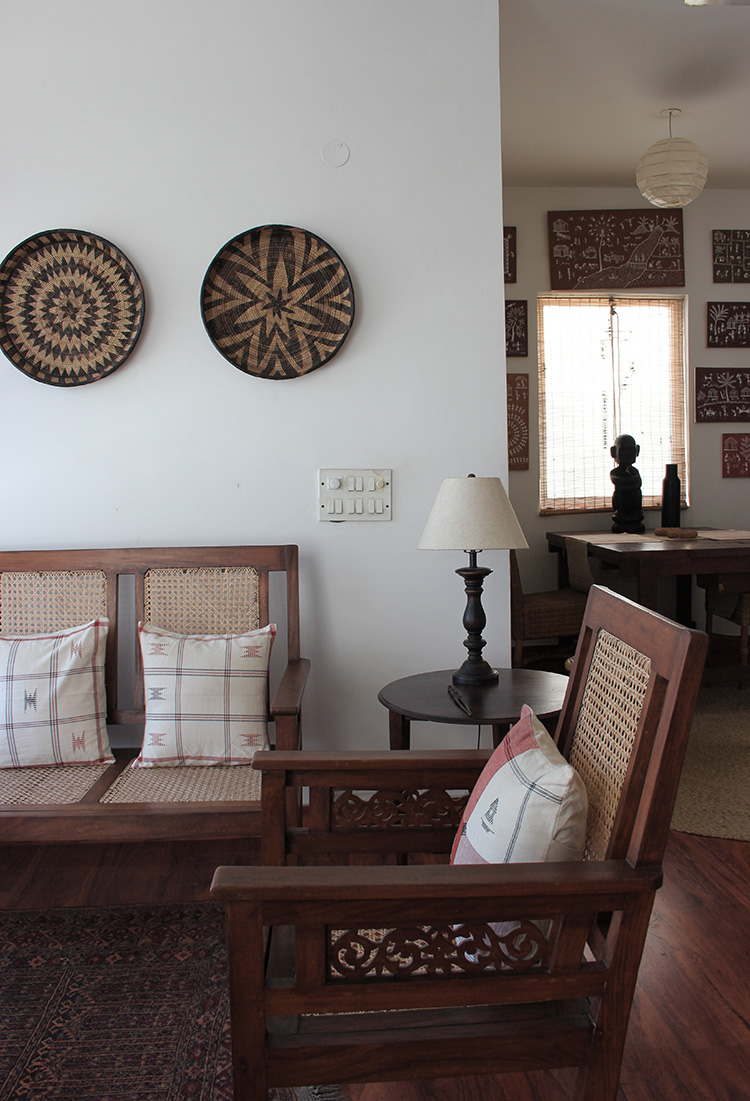 You can spot the dining space in this picture. Indigenous weaves and art connected each area of this small Barsati. Although we put up a good fight against the flooring you see here, we ultimately gave in to the faux wood flooring because of a lack of time 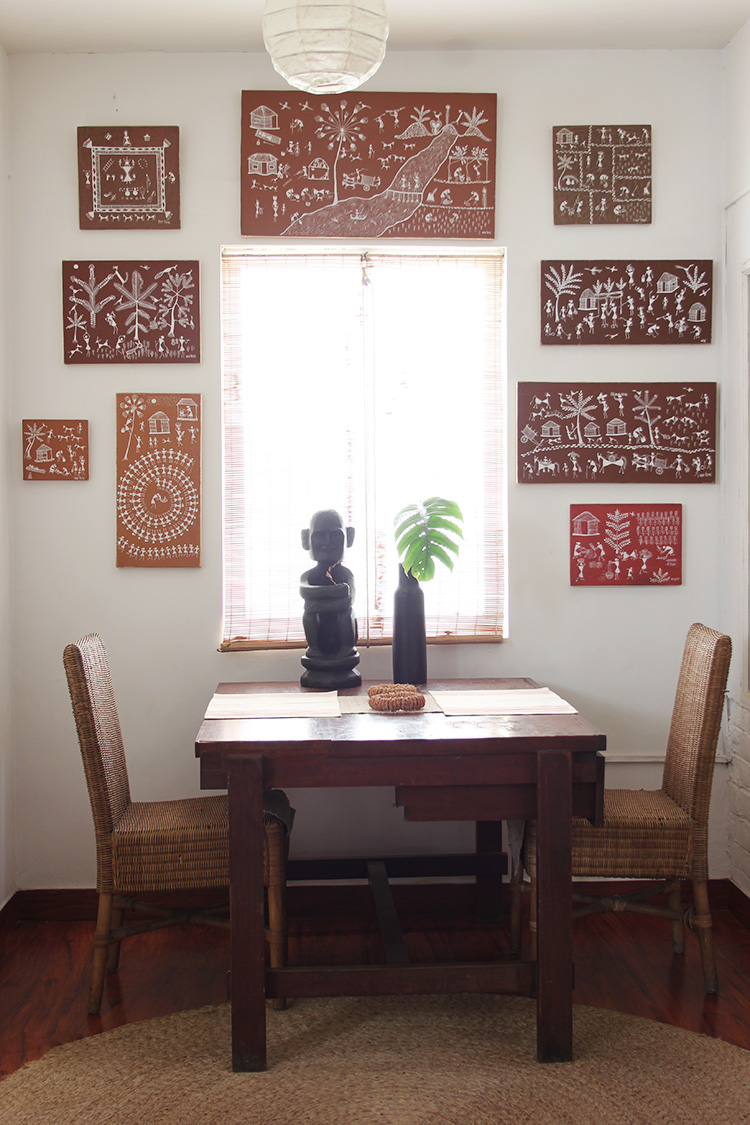 The small dining space, perfect for a couple or an individual,  contained an old desk converted into a dining table, a small paper lampshade and beautifully drawn Warli art. 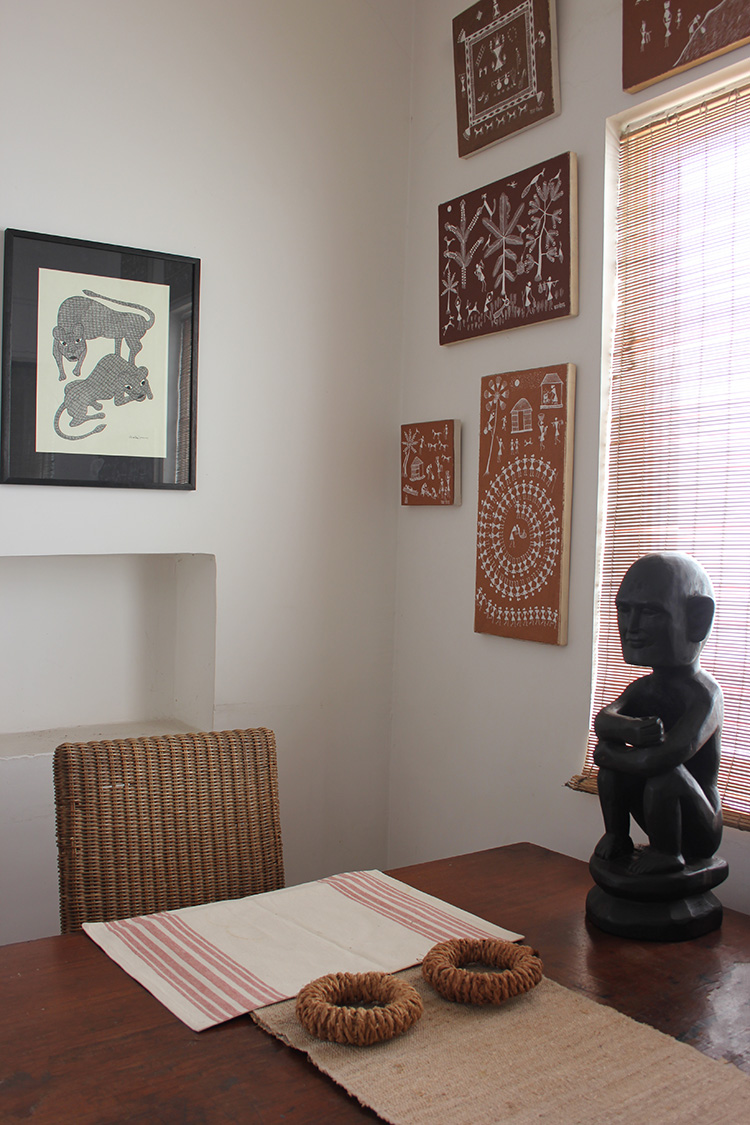 Here’s a closer look at the indigenous art on the walls. The Gond drawing was purchased from the annual Dastkar handicrafts bazaar in Delhi and  the Warli art were sourced  from the tribal village my friend was associated with 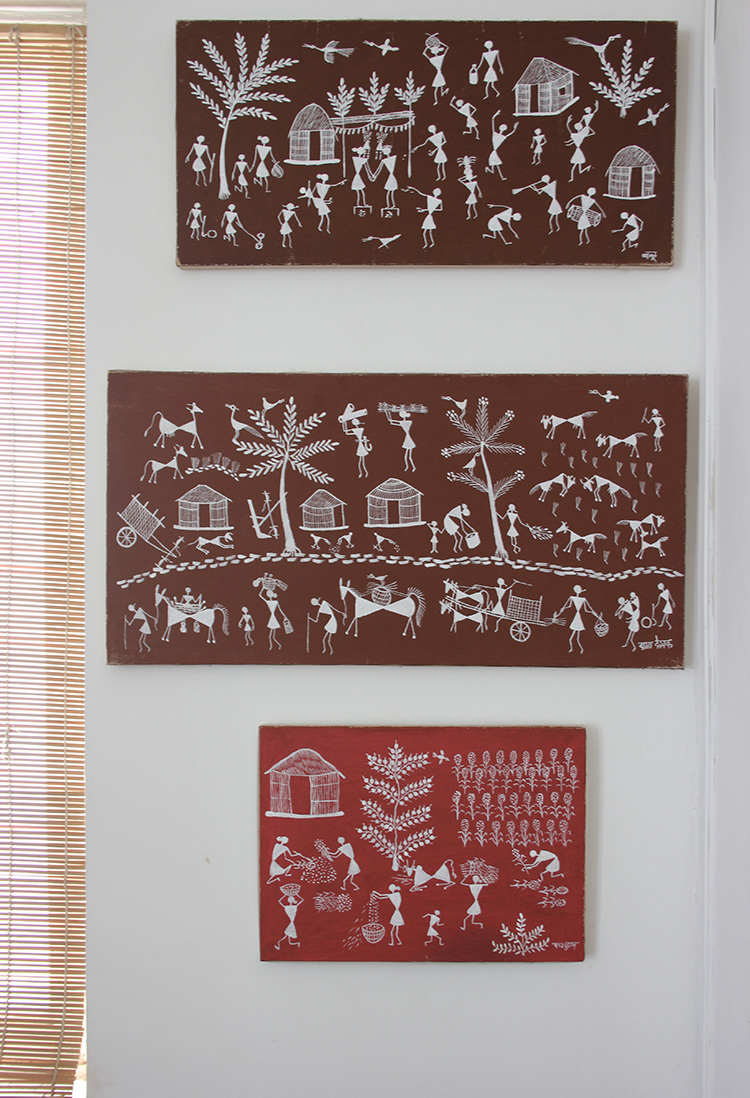 The details of village life – children playing with their toys, a man tending his livestock and poultry, women harvesting crop and festival depictions  were absorbing  and transporting. 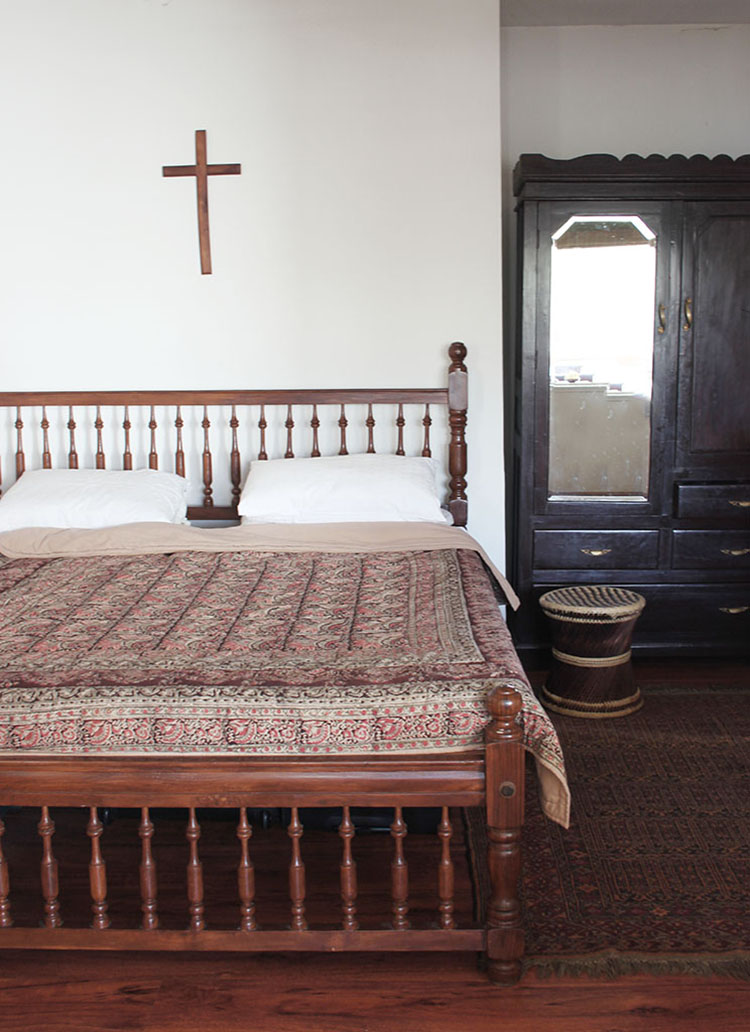 This is the second bedroom in the Barsati, a relatively big room with a low ceiling that felt like a  comforting retreat. We christened  it ‘The Cave’. A Kalamkari quilt adorns the vintage bed, a cross sold to me by a wandering salesman was the only decoration on the wall. 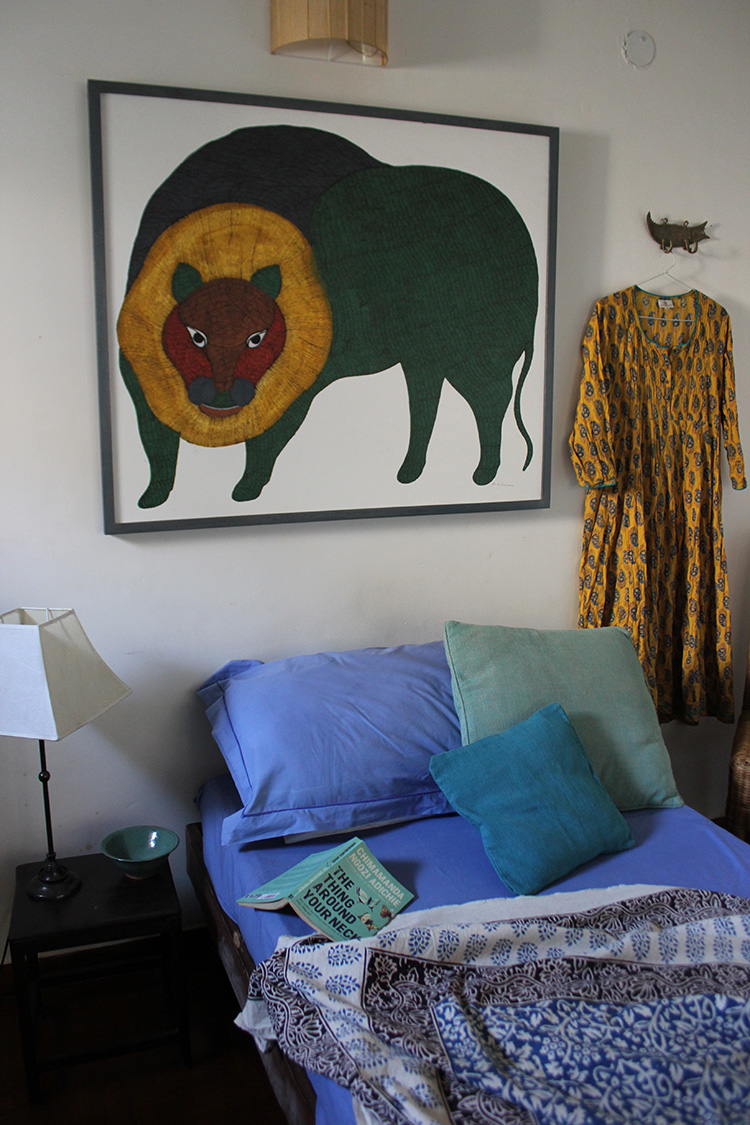 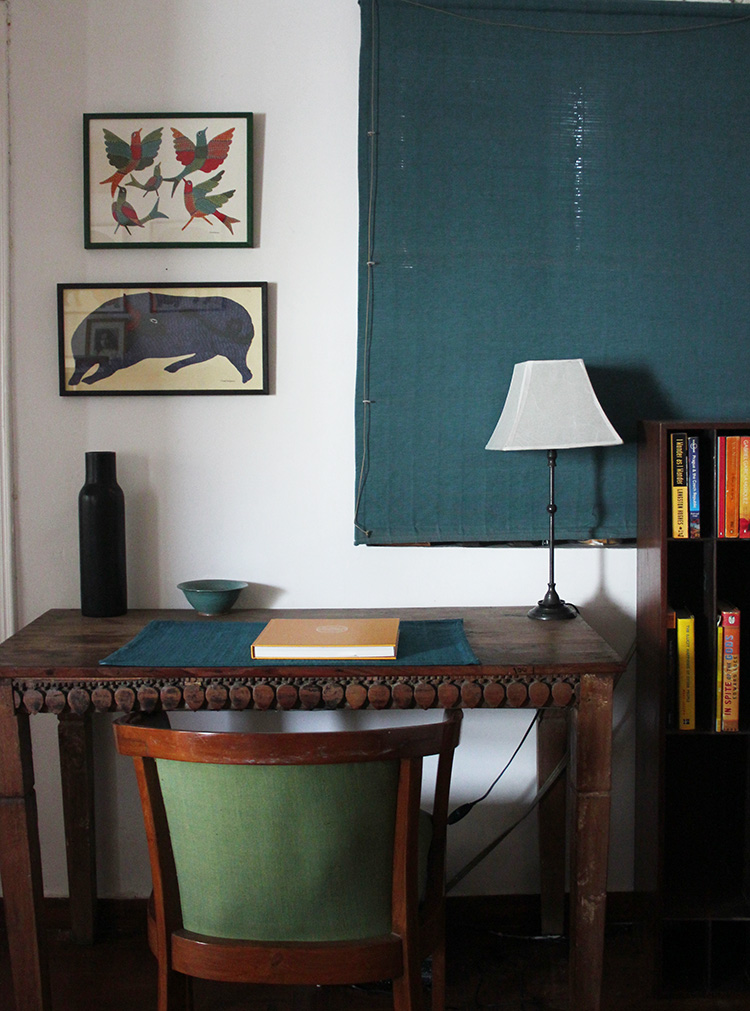 This is not the best of pictures, but this feature would be incomplete without sharing what was perhaps the most productive area of Barsati – the small work corner. The Gond art was a purchase from the Dastkar handicrafts bazaar in Delhi, the handloom fabric on the chair and the blind from Fab India and the lamp from a store in Zamrudpur, Delhi

An Early Project in Gurgaon with Tips to Hang Wall Art

A Home In Delhi