Interior design in India, when not hastily copied from ideas of modernism, can remind us of an older India— one of unhurried days, where streets and  houses coexisted  in planned proportion; where pavements and less busy roads enticed us to walk and where local hand crafted  furniture marked the essence of interior design.

An e-commerce company, Redstart based in Bangalore, decided to bring this idea into its new office space—the second floor of an old 1960s house on Charles Campbell road. Charles Campbell road, like much of its neighbourhood has seen rapid change over the last 20 years. Older houses, once neatly laid out on the sides of narrow roads with shaded  pavements, have given way to a haphazard arrangement of high rises.

George, the founder of Redstart, was deeply influenced by his relative Mickey Patel—artist extraordinaire, whose art and life personified Gandhian themes. Patel’s original and clever caricatures depicted topical themes of  a slower time. The interior design of the office is a coming together of handmade furniture, sourced locally or made at site, Mickey Patel’s sketches and caricatures, handloom fabric, a bounty of ivy and bougainvillea in its surroundings, natural woven grass mats and of course, e-commerce!

George’s office is a reminder that there is still space today for the traditional that is elegant and warm; that the handmade has a quiet eloquence and that interior design can be inspired from history and slow living. 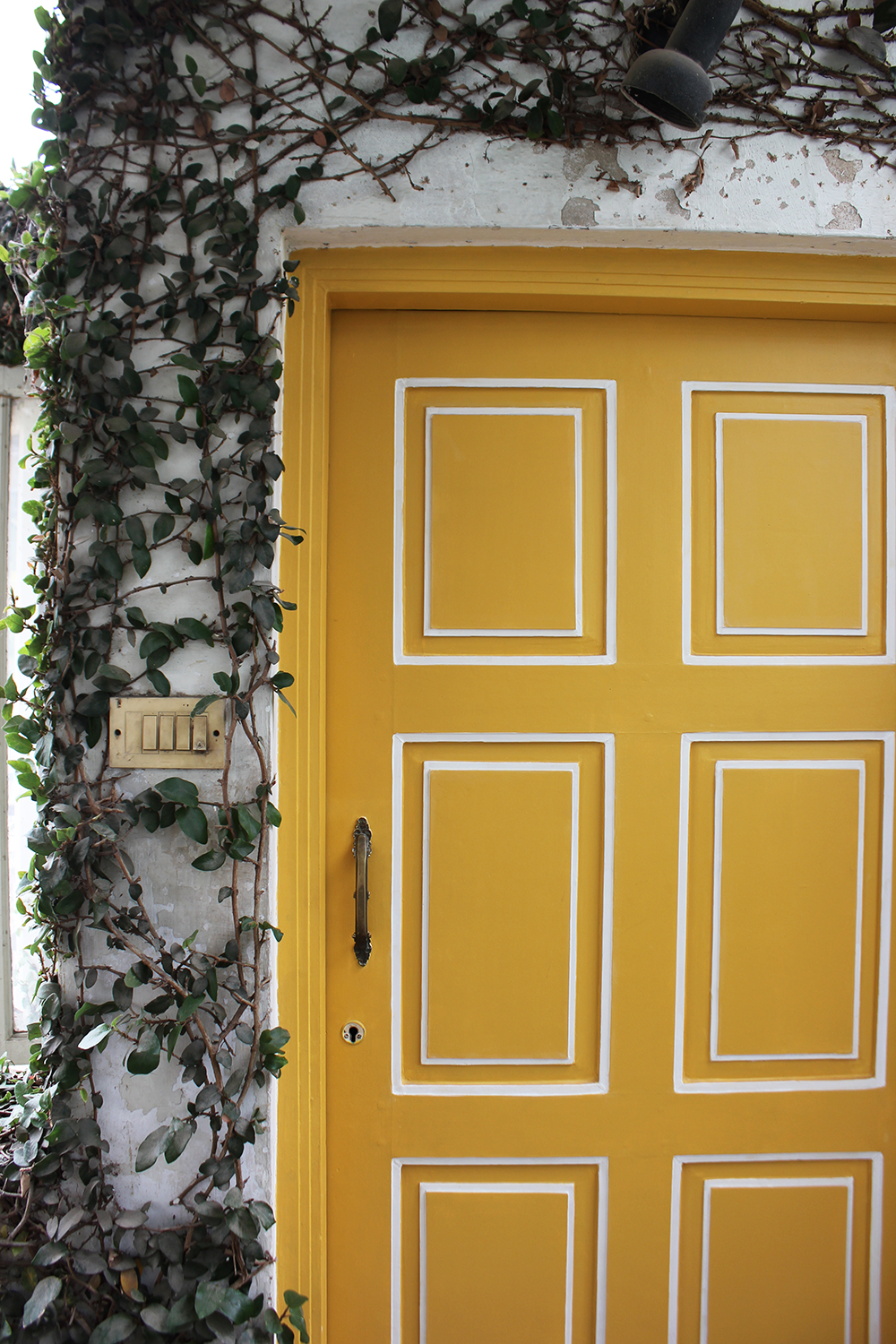 The entry to the office, located on the first floor. A standard cream entrance door was transformed by a coat of cheery yellow paint. 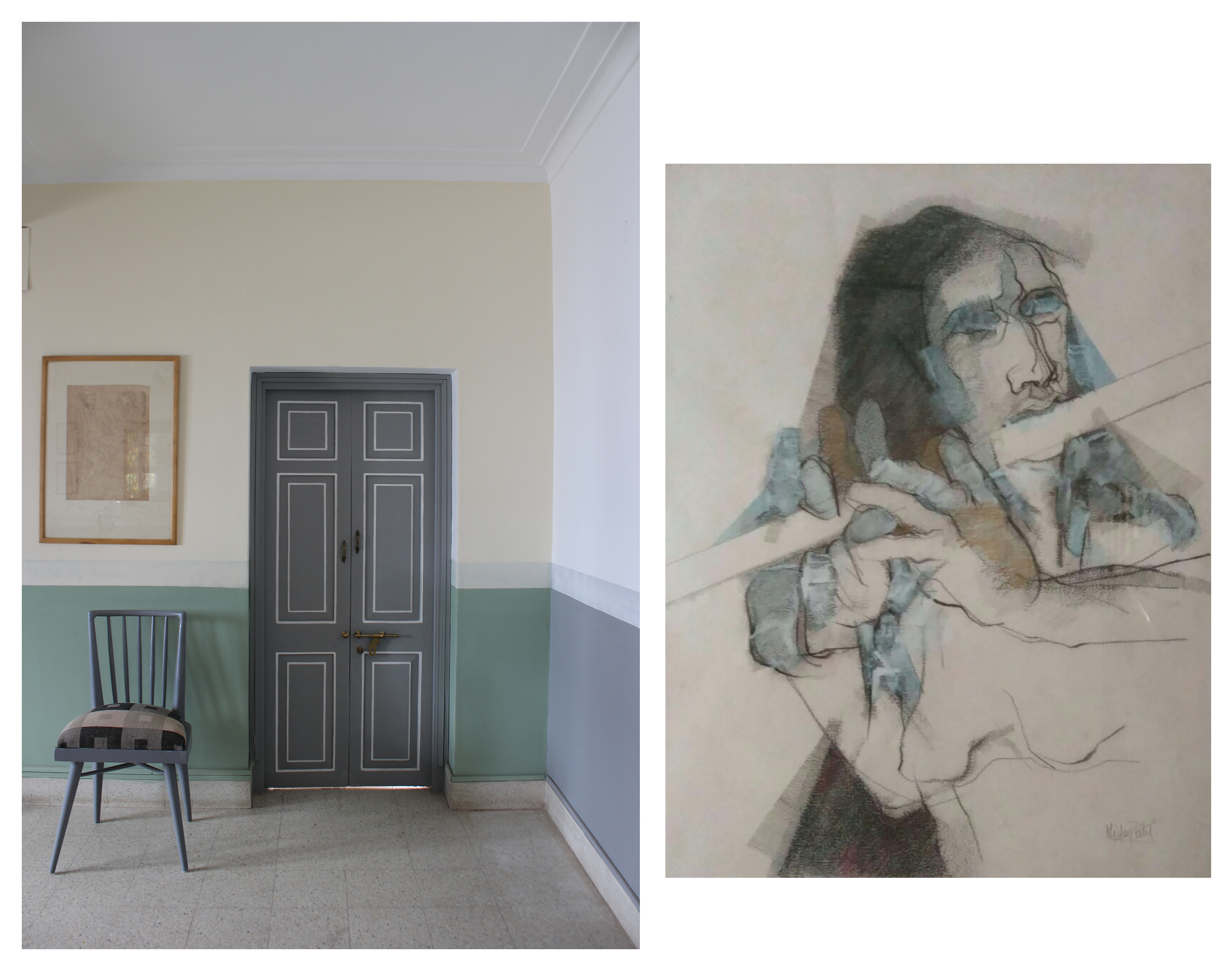 The entry leads into this room, one  that connected  other rooms in the space. We moved from a bright interior colour scheme to a more soothing one here, choosing to play with half painted walls in whites, creams, greys and a green. The image on the right is another work of Patel. 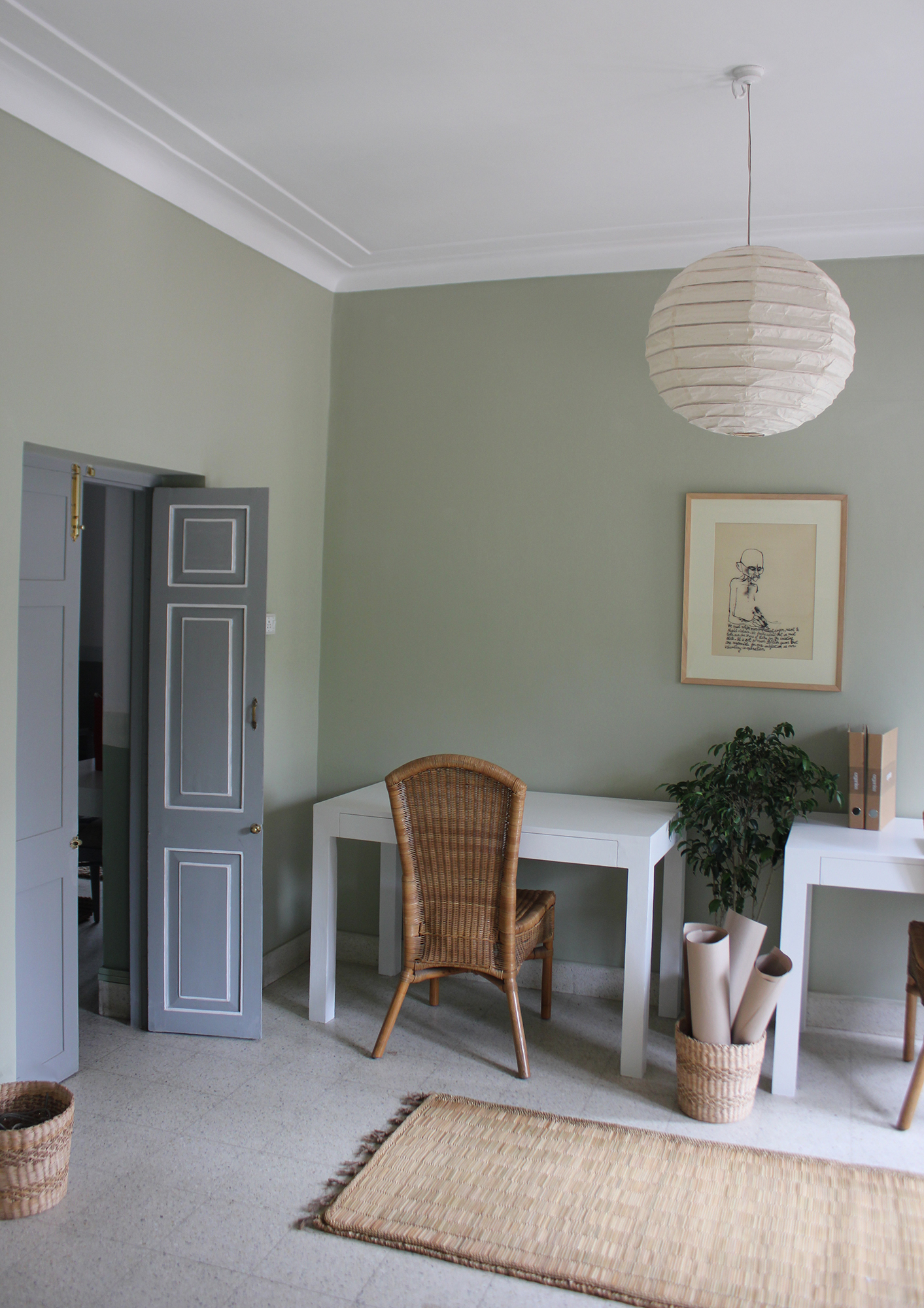 This is the most used room in  the space and looks out to a terrace on one side and the hall on the other.  It was designed to sooth. We painted the doors a cool grey and the walls a soothing green. The desks were designed to match a design the client liked and Mickey Patel’s Gandhi sketches were printed on butter paper and framed in wood for the walls. The original room was bare & painted cream. Images of the older space are on our before- after Instagram stories. 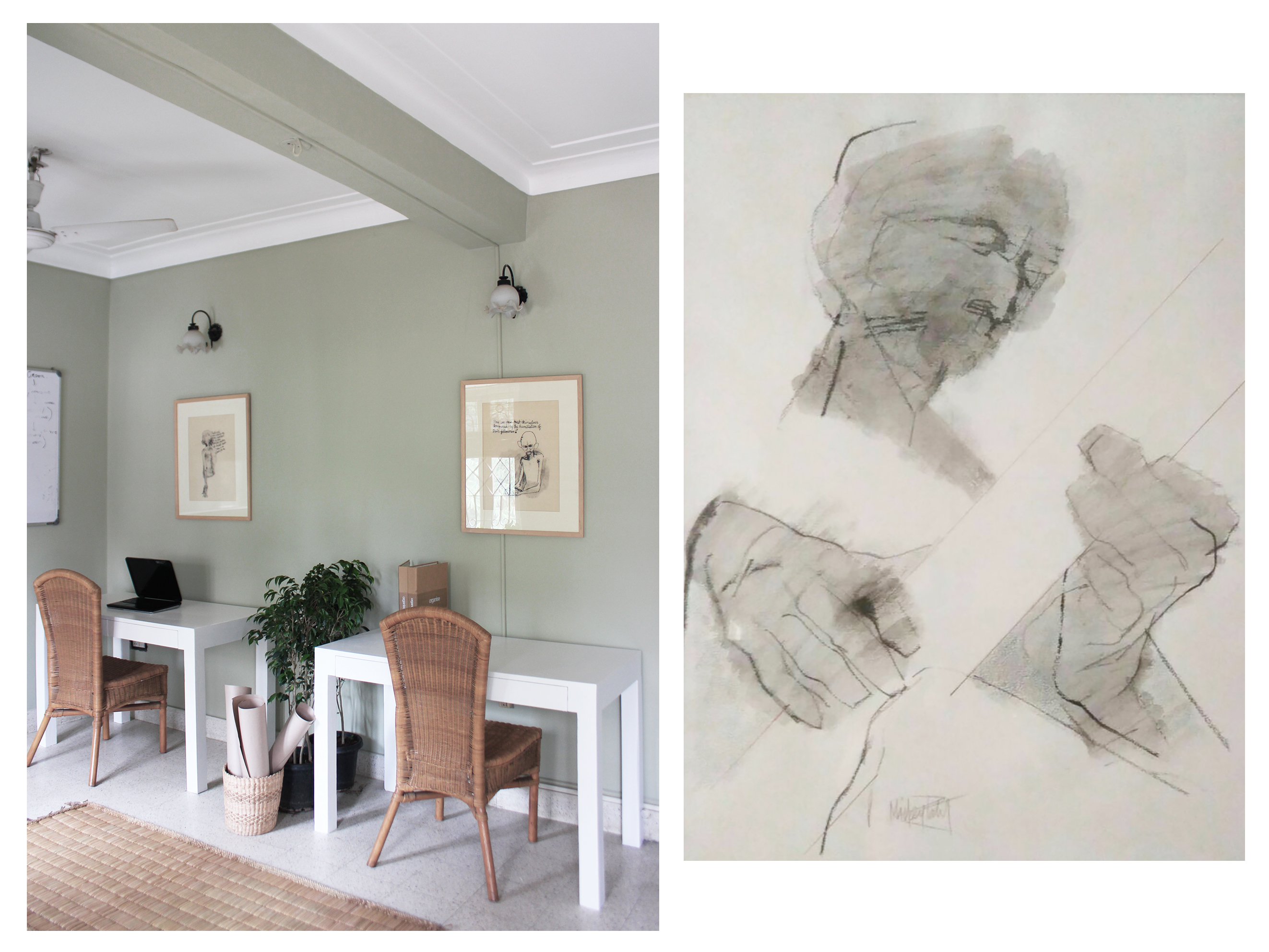 This is left side of the same room. The chairs were found on an online sale. The art on the right, also by Patel, was considered before we settled on the Gandhi prints. 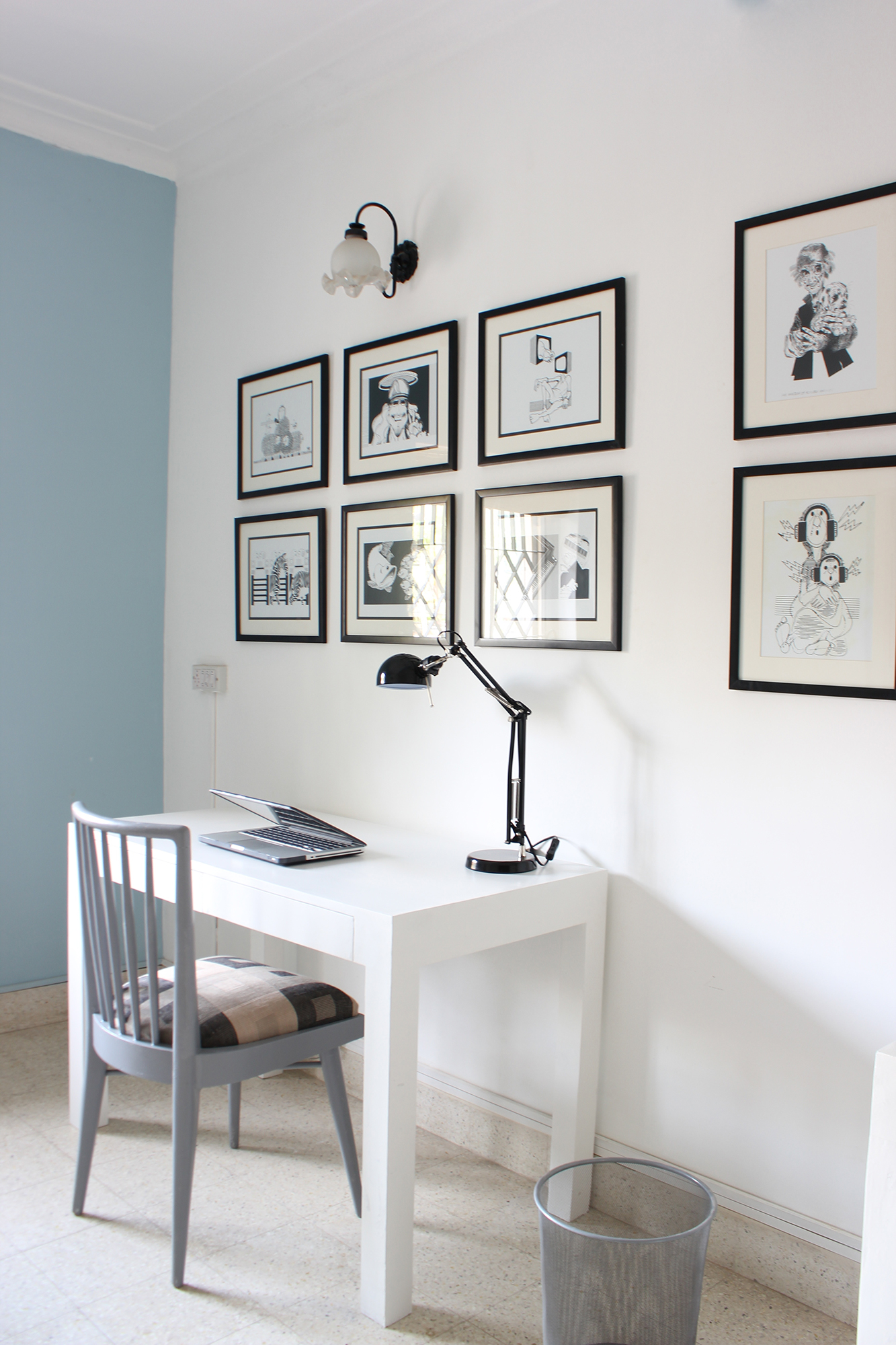 This is the second office room. We chose to paint it sky blue and white. Once again it was designed to be soothing. The walls were lined all the way round with a series of Patel’s sketches. 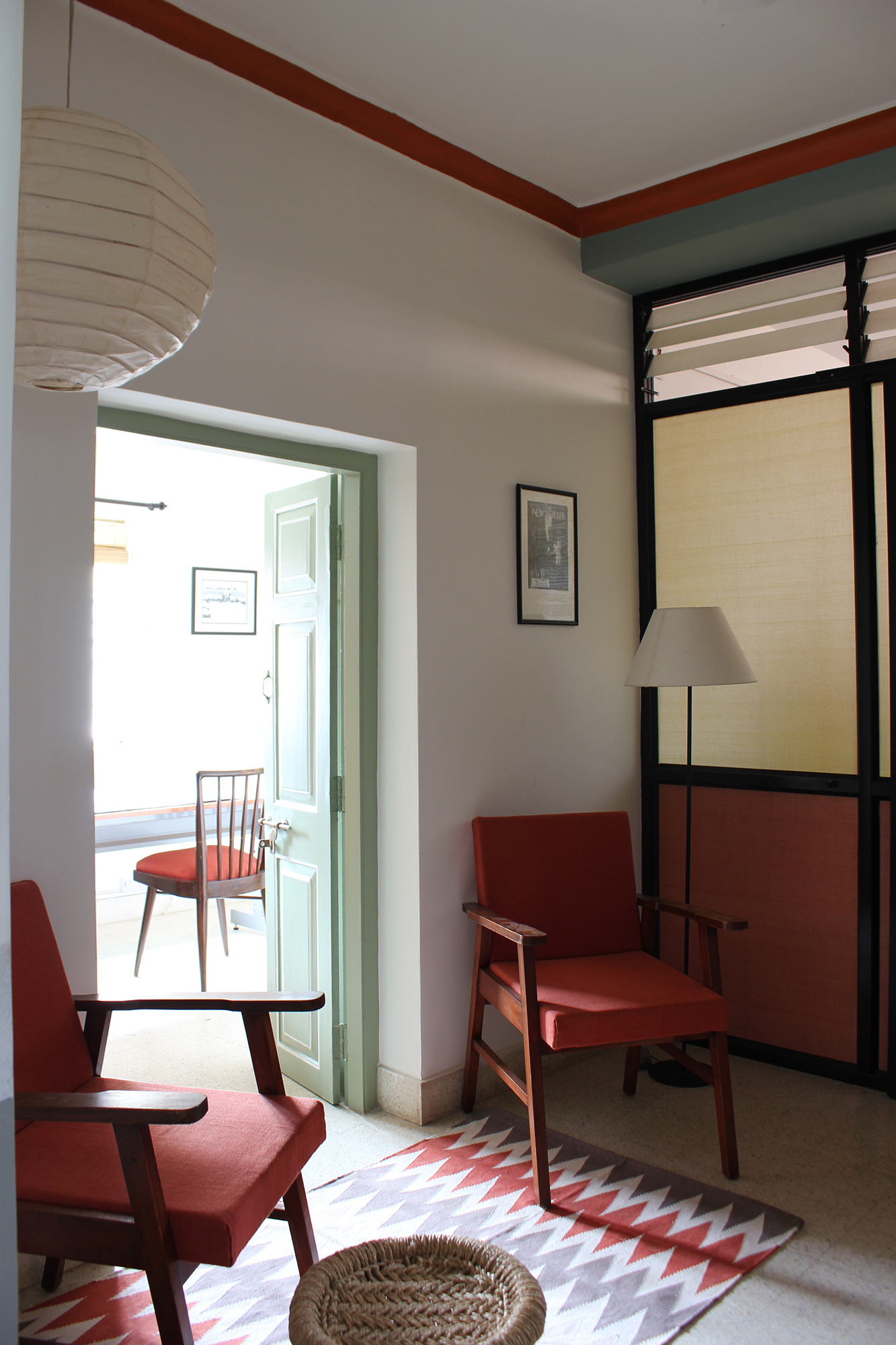 This room, located at end of house  served as a sort of transition space between a pantry and a meeting room. The aluminium and glass partition doors were disguised with handloom fabric. The chairs were reupholstered with cotton handloom and a mooda served as a side table.