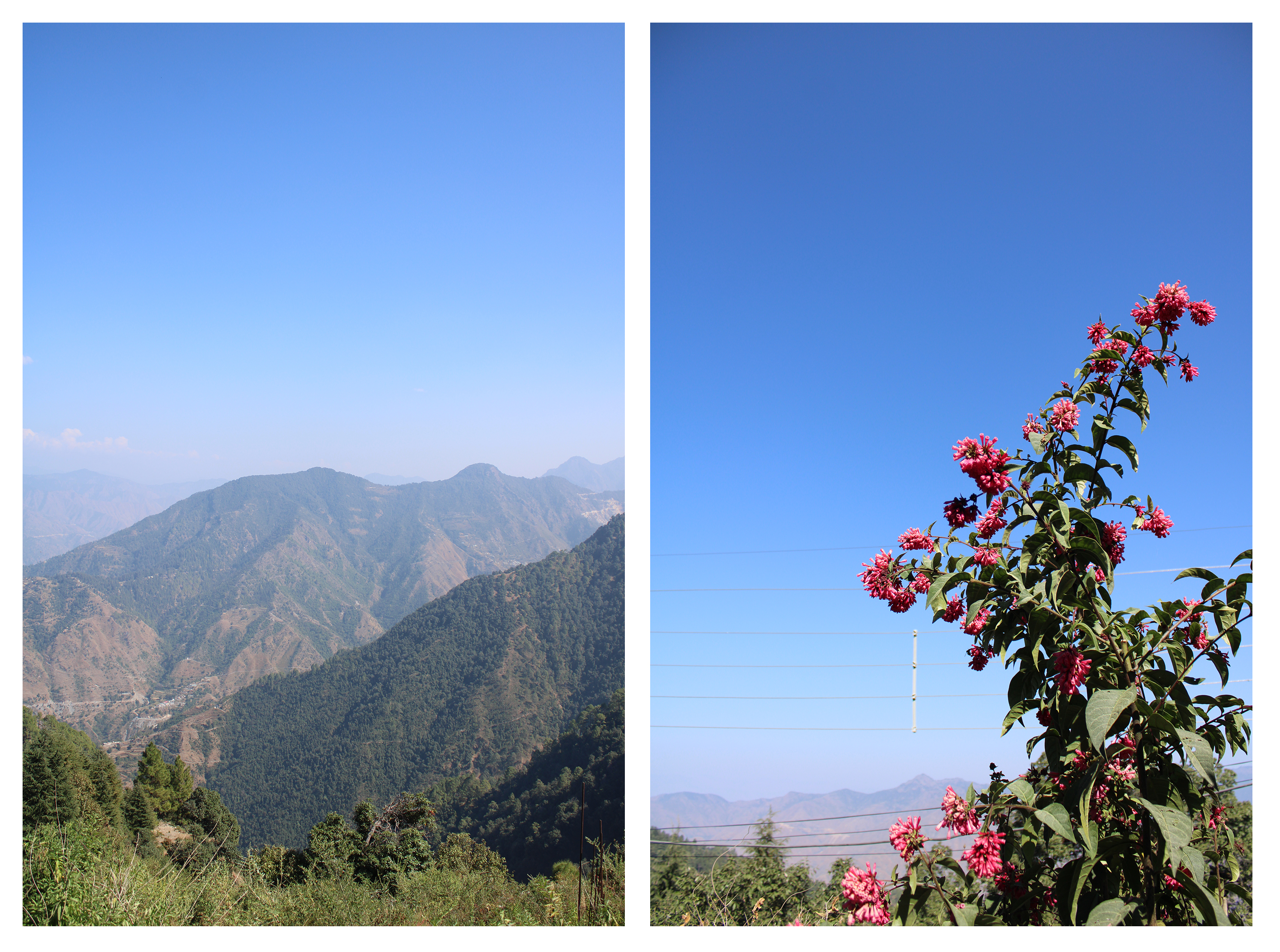 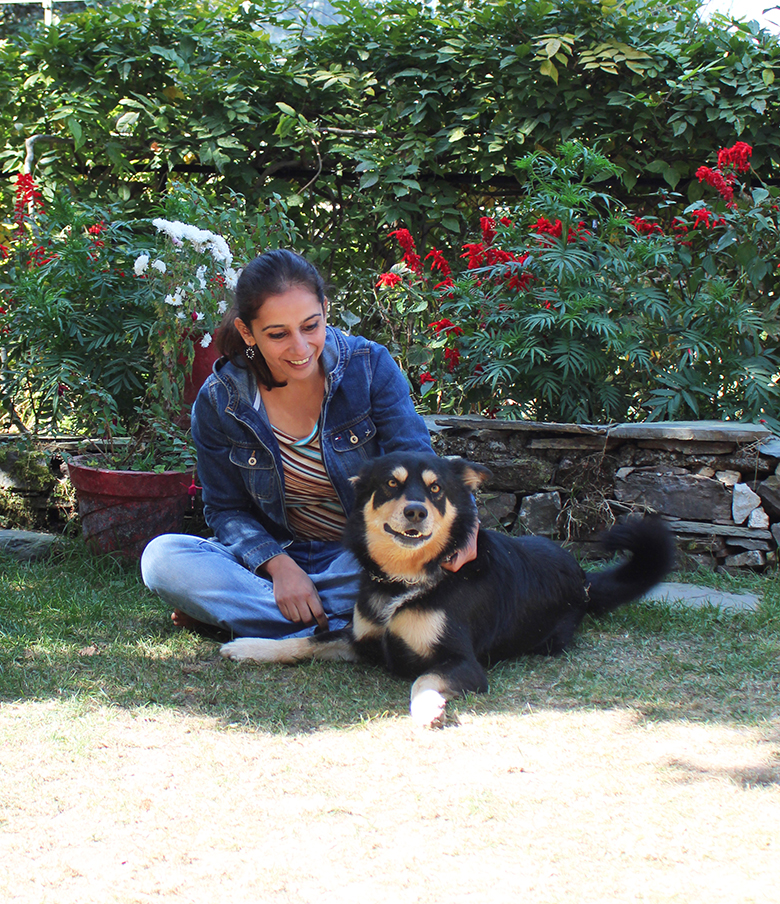 Kilmarnock is not just a summer home. It’s a home that’s  been loved and lived in for decades through Himalayan summers, springs and winters by Shivranjani Singh, a CAM practitioner  and her family, descendants of the royal family of Kuthar, Himachal Pradesh.

The 180 year old  house located on the periphery of the  Institute of Technology Management was  first built  for the resident doctor of the  British Military Hospital (BMH).  It’s  since  passed hands and has been altered only slightly by successive owners. Today the interiors get  their personality from  Shivranjani’s family, friends, the help and numerous pets . The pets at Kilmarnock,  as the residents of Landour know well,  must  be contended with first before one meets the humans of the house. Zoravar, Genghis, Bhaktavar or one of the other seven adopted mountain dogs on the property raucously greet passersby making Kilmarnock distinctively recognisable.  Years ago,  you  might  even have been stopped by Bijoux  the adopted Monkey or a ferocious Rooster. Yet, despite the excitement caused by it’s animals,  the old home  has a quiet about it especially  when the sun goes down.

On a recent visit to Landour, I  met Shivranjani  on one of our  joint excursions around the mountains & town. It was a long day of hiking that closed with us having to negotiate an unpleasant  line of traffic from Landour market to her home–a 20 minute uphill trek. This scene was quite different from  when I first visited Landour . As we sat  on the verandah that evening  listening to the  weeks happenings around the hillside, while  Zoravar raced about chasing  Langurs, the  house lights were turned on and  I spoke to Shivranjani about Landour and her home.

How long have you  been at Kilmarnock? What are your early memories of the Landour?

We moved here from our old home on Camel’s Back Road, Mussoorie in 1988. Landour was then  much quieter than it is now, less commercial,  more rural and secluded. There were no newspapers and we didn’t have television then. The milkman from the village would always  show up the next morning of our arrival, as he’d could tell that we were in Landour  when the lights at home were turned on at night.  Char Dukaan (a row of 4 general stores cum tea stalls)  was the  local hangout, a club of sorts for the residents.  There were usually only a dozen people around there then. I remember my sister and I as children being driven up to Landour from Delhi by our aunt in an  NE 118, piled with cages that housed our white mice Glasnost, Paprika and Perestroika  and another with our cat, Kit Kat. We were quite well recognised then by the dhabas along the way and the pets were a source of much amusement.

We inherited a lot of the furniture you see when we moved in. The cornice detailing  was hidden by years of  paint. We scraped this away to discover the moulding  that you now see. My aunt, Rani Prama Devi  and I choose the colours for when we paint. Both of us like bright colours as you can see.  All our homes have lots of colour. In this home, we chose colour based on what time the sun would come into a particular room.

Most of the interior design in this home evolved slowly, year after year. Growing up we had many of our friends stay over. To keep the children buy, my parents would ask us to help with the painting and polishing. That’s why you see the drawings on the windows– each child was given a pane on a  window to paint as a reminder that they stayed with us. We helped with polishing furniture too.

What’s changed  in Landour over the years and what would you like to change about it now?

It used to be  more of a residential  place with occasional travellers, language school students,  artists  and writers visiting to stay for extended periods. I remember learning Japanese from a traveller who rented from us then. These people would often  became a part of the community—I made friends that way— and they’d come back often. It’s a lot noisier now with the new cafes and boutique hotels that have come up. These places  cater to tourists, some  of whom are quite insensitive to the environment. You have traffic whizzing past even at 2 am now. The changes were slow initially–newspapers got delivered unlike before, we got a  television connection, a few more tourists came in and then all of a sudden it changed in a big way. This happened around 10 years ago when city businesses smelled money in Landour.

You can’t turn back development, but what I’d like to see is tourists more sensitised to the local environment and culture, more responsible tourism on the part of the businesses that have opened here, better waste management and maybe the regulation of traffic coming into Landour. 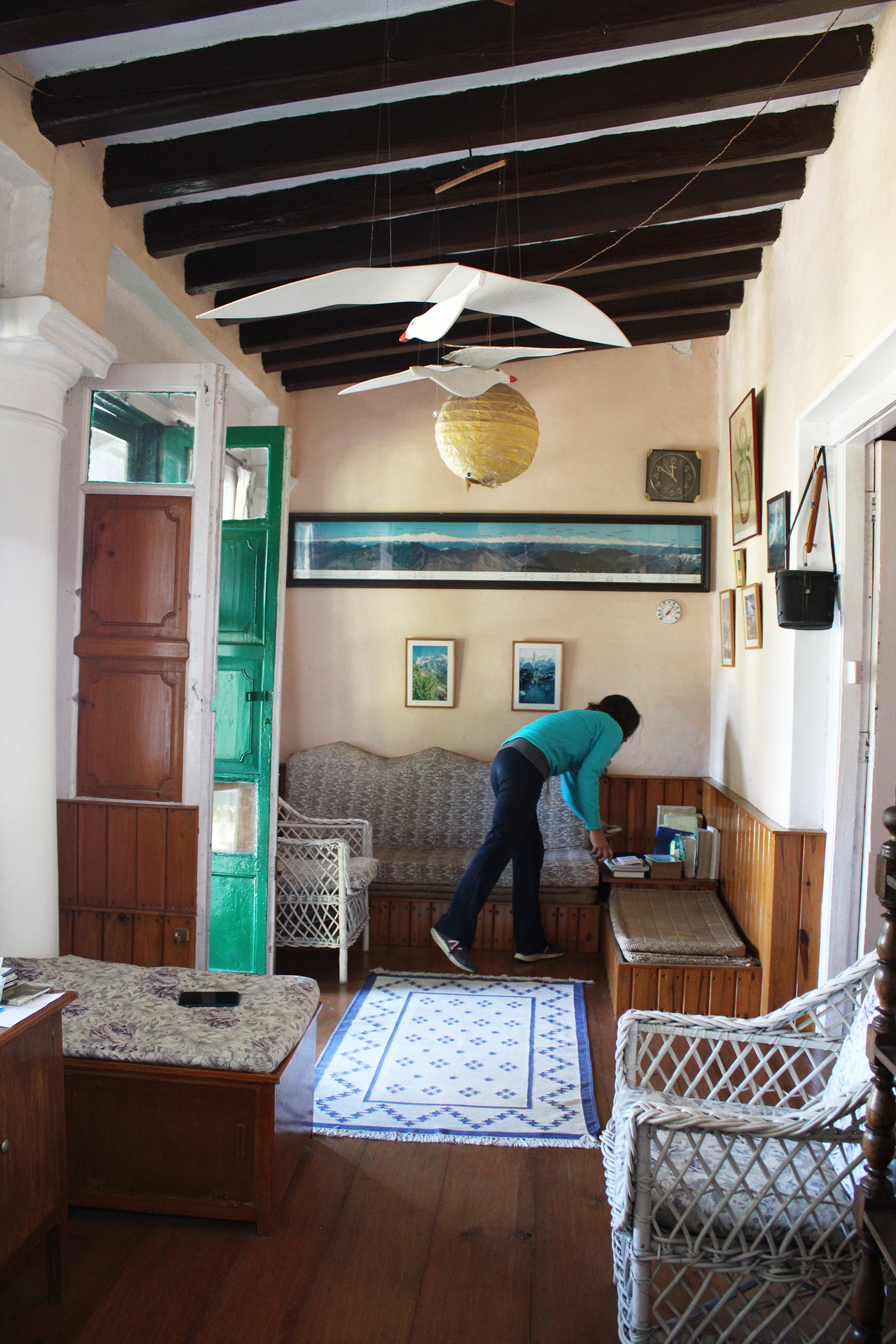 The entryway, panelled in pine wood, the ceiling beams are of Deodar. 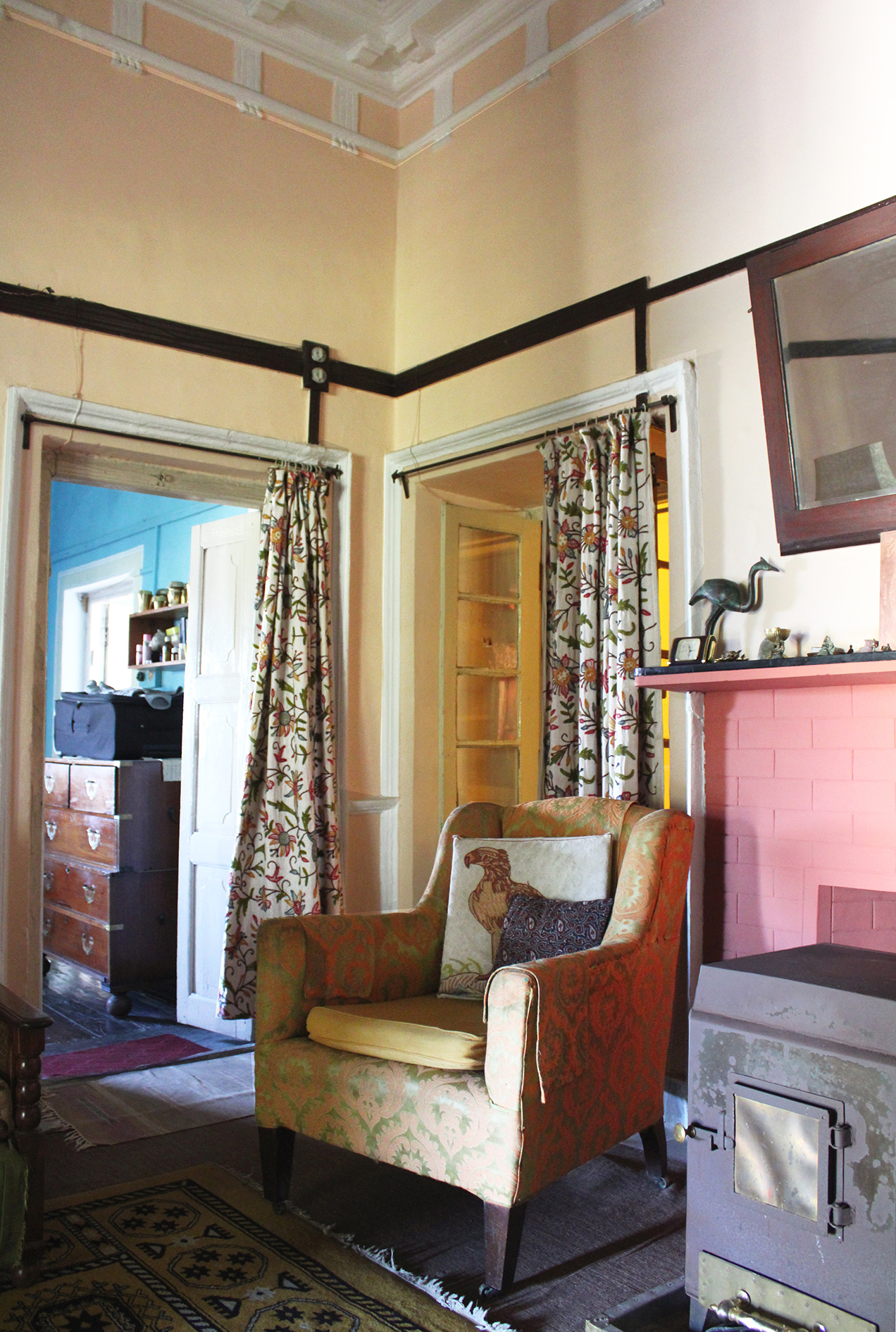 A corner of the living room that leads to bedrooms. The  furniture came with the house. The cornices were hidden by years of paint and lime and only discovered  during a recent refurbishment 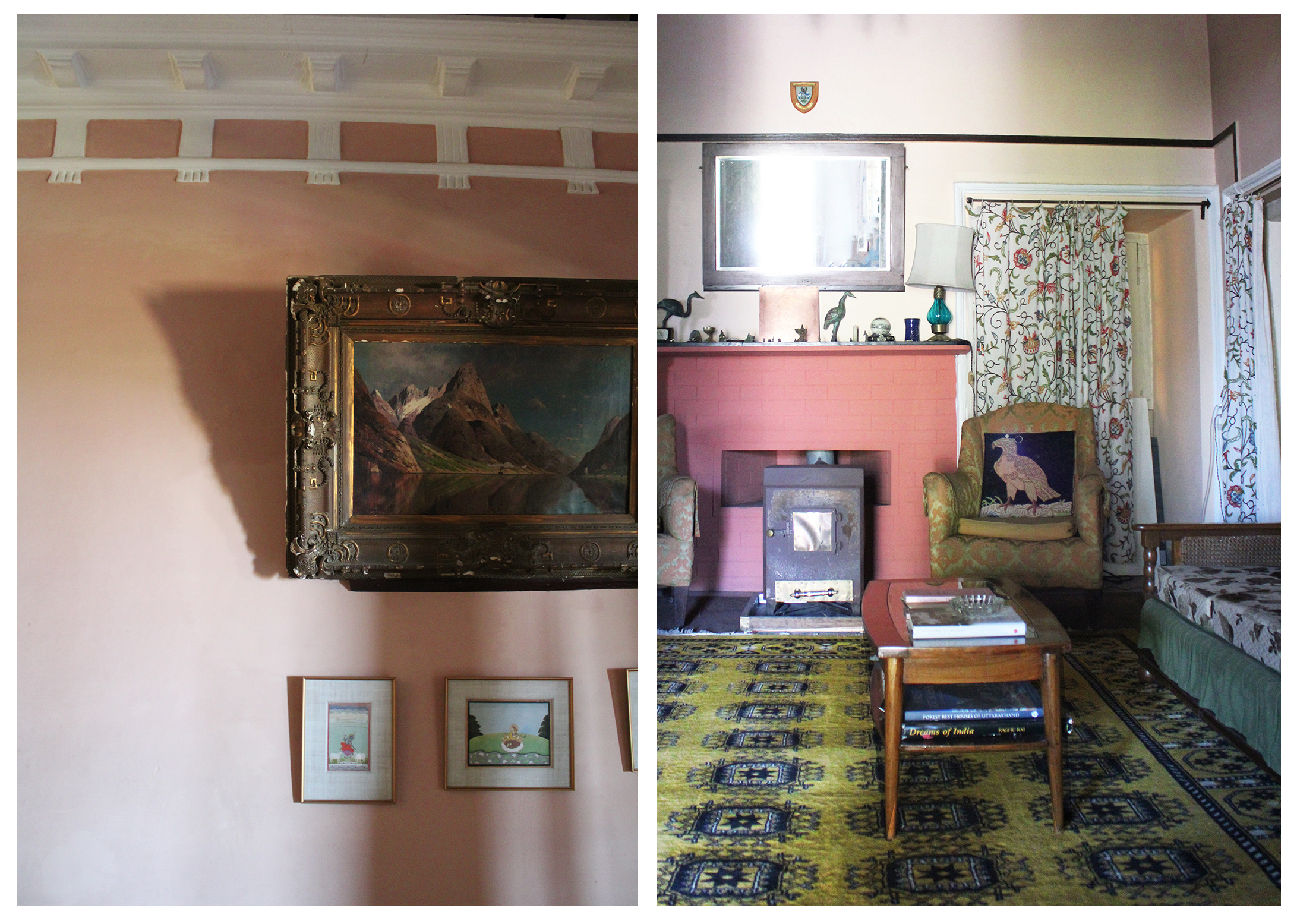 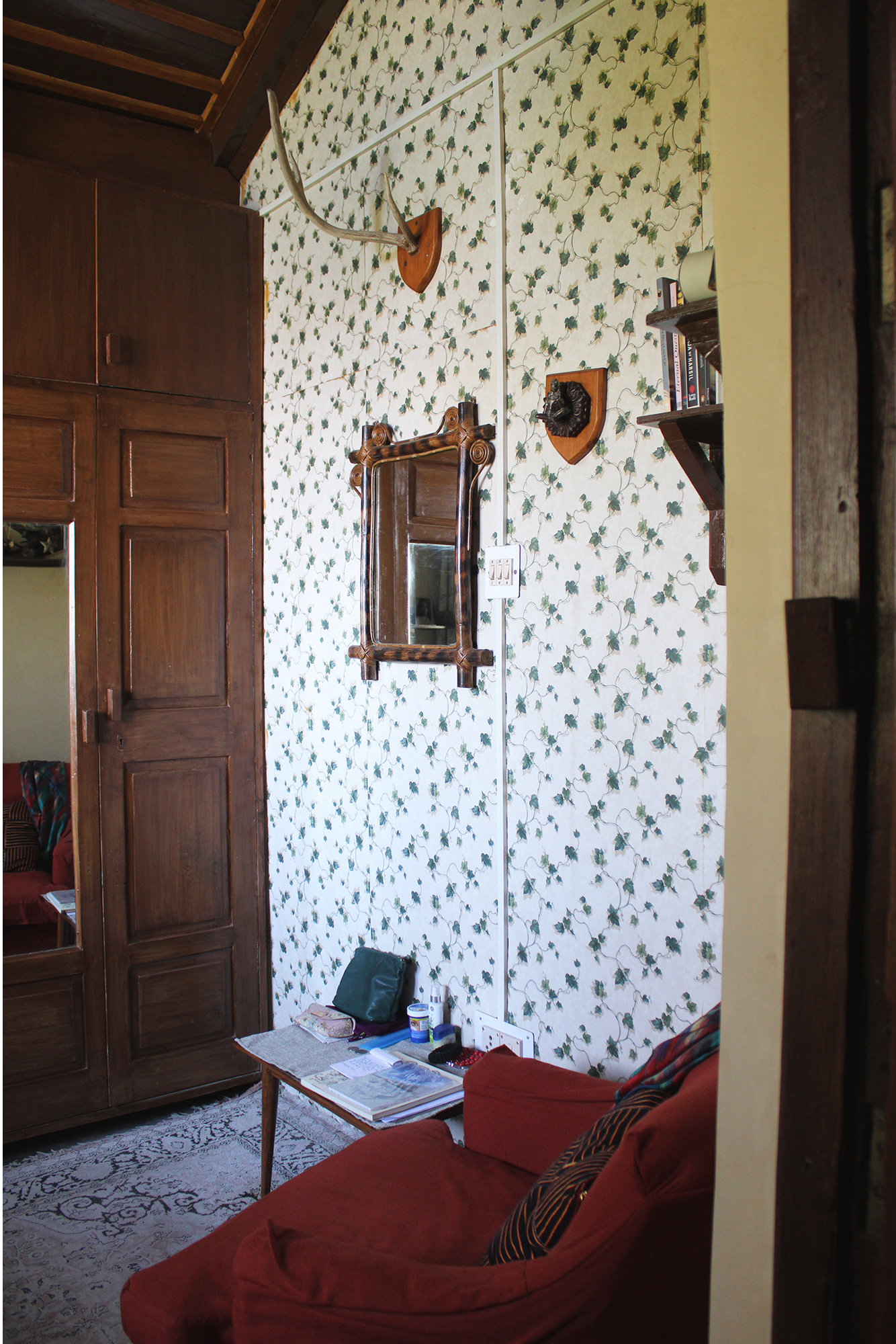 The entry to a bedroom. The wallpaper was found and used many years after it was bought in the United States.  The antler on the wall was found in Sariska Tiger Reserve, Rajasthan 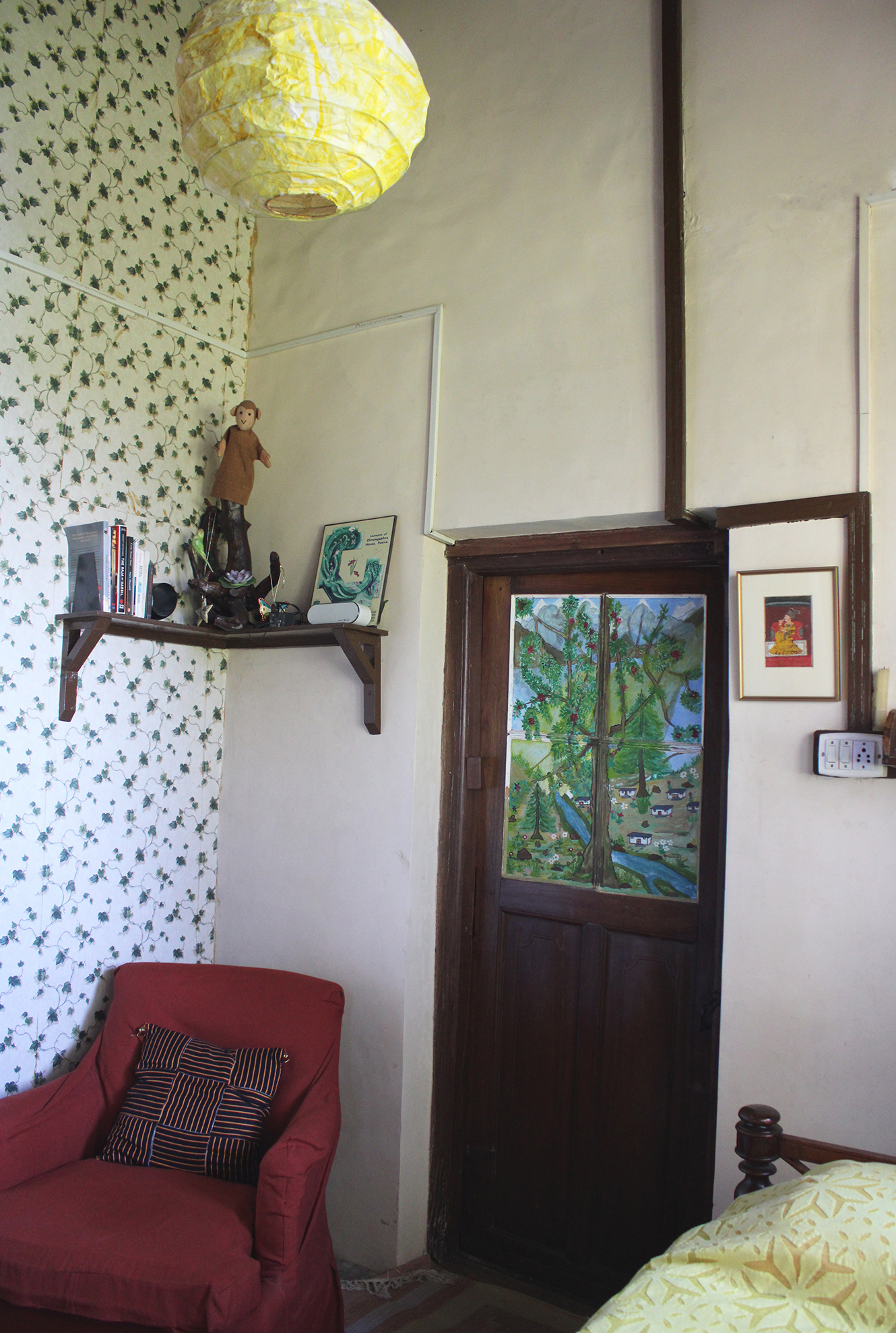 The glass on the door window was painted by friends  staying over.   The miniature painting is from the Kangra school of miniature art 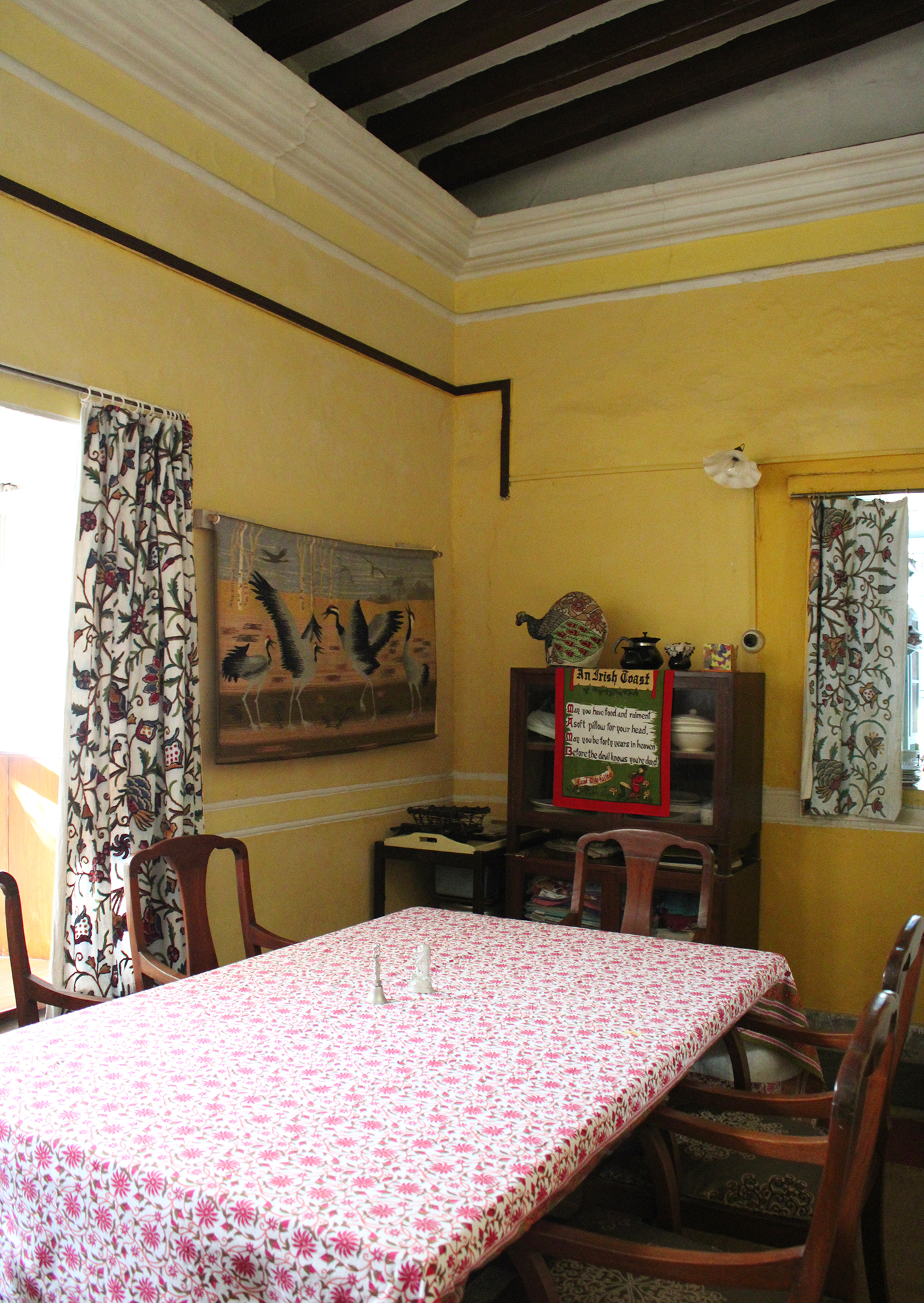 The dining room with art that came with the house 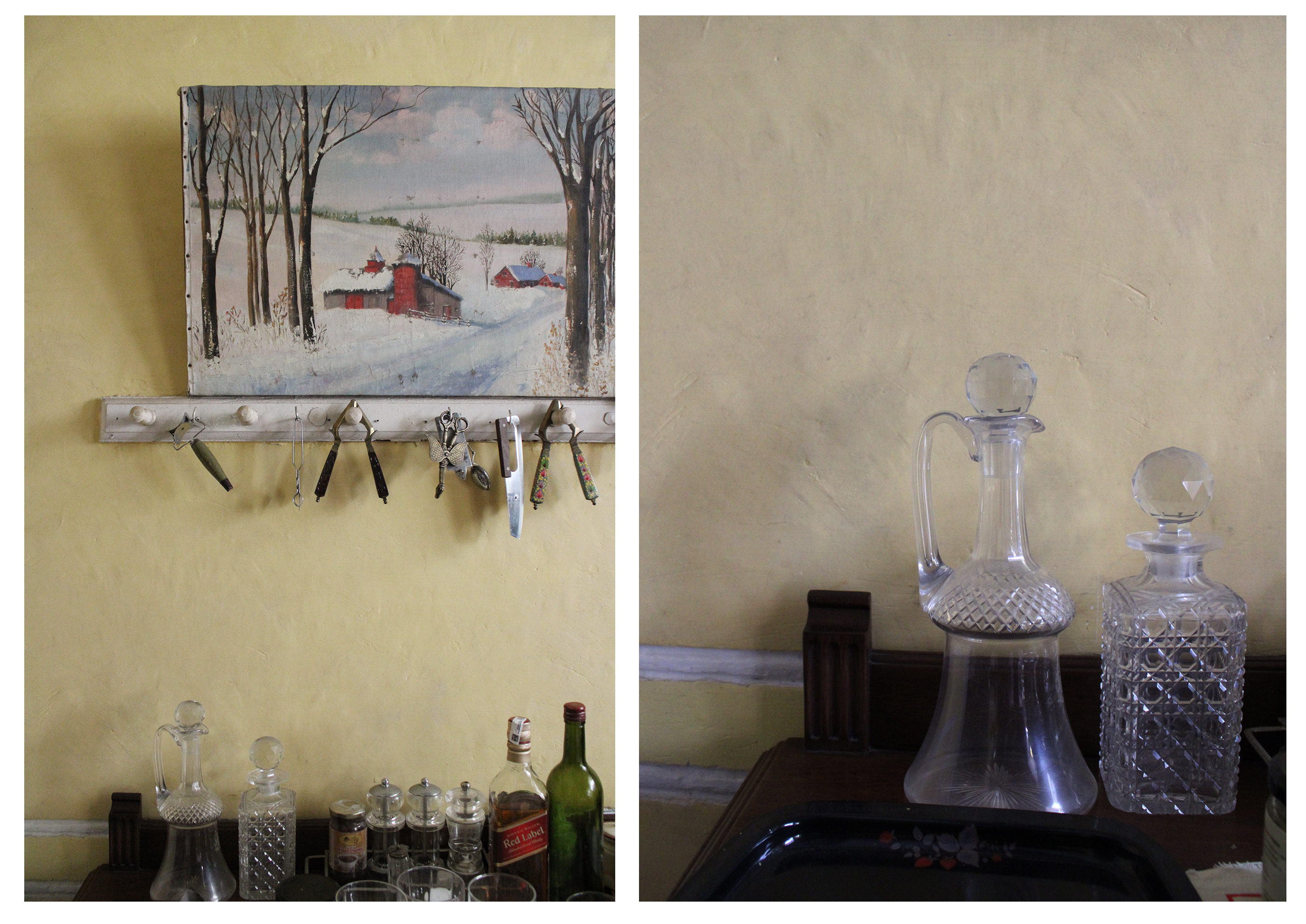 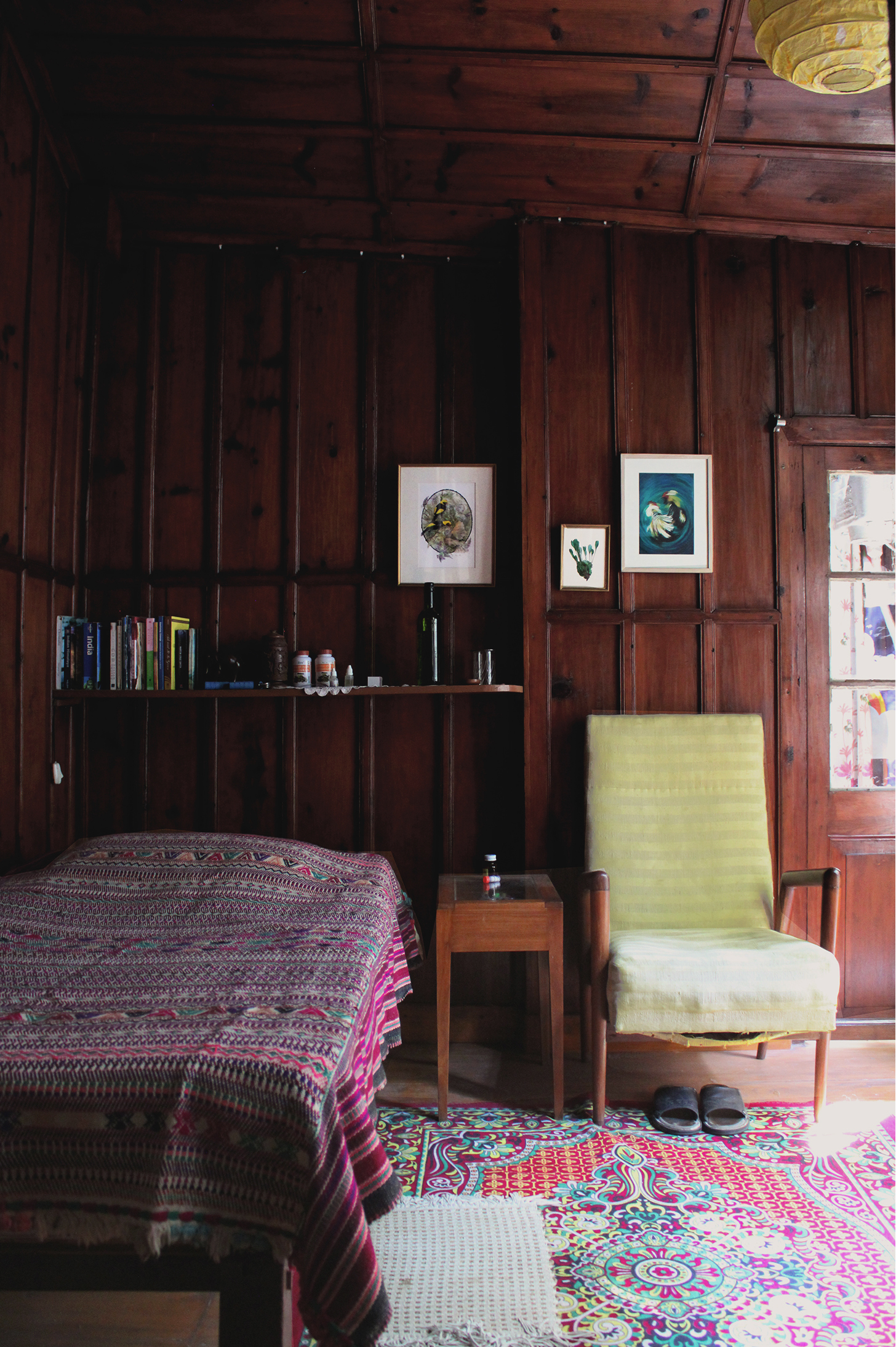 A Deodar panelled bedroom.  The art on the left is by Australian artist Valerie Stephan, the piece in the centre is a framed crest of a Himalayan Monal  and the art on the right is a portrait of the angry pet rooster captured by a local artist. 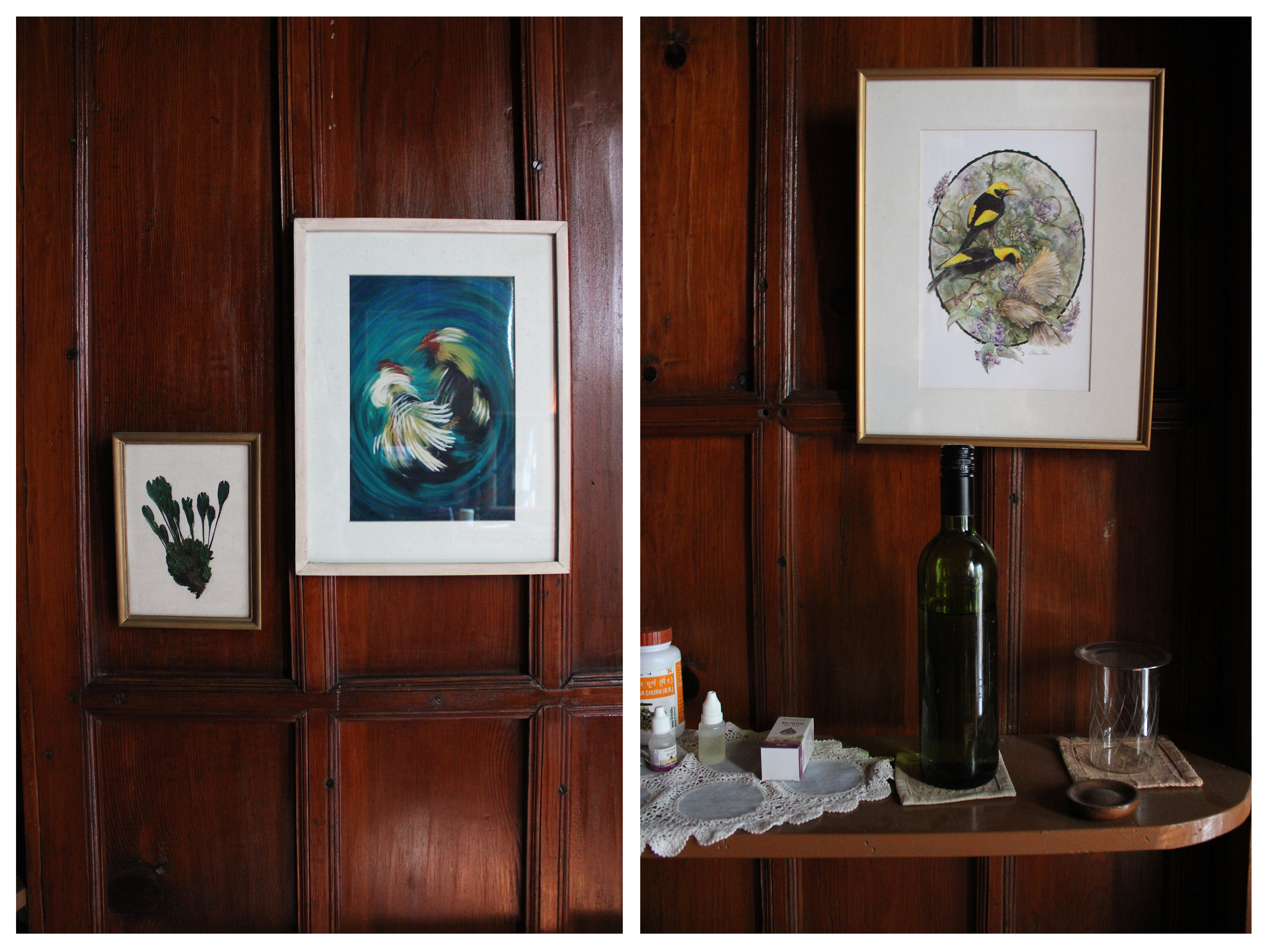 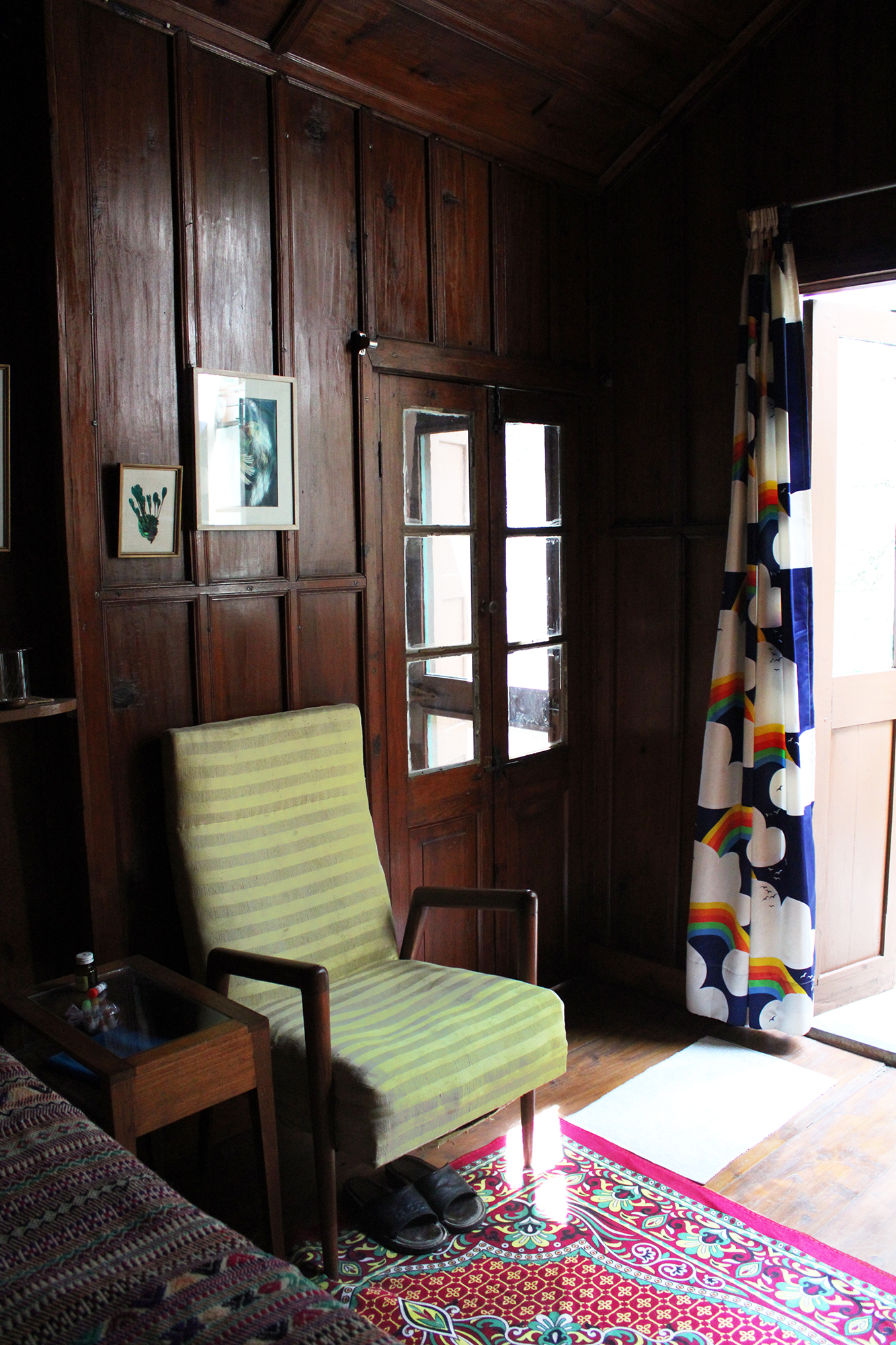 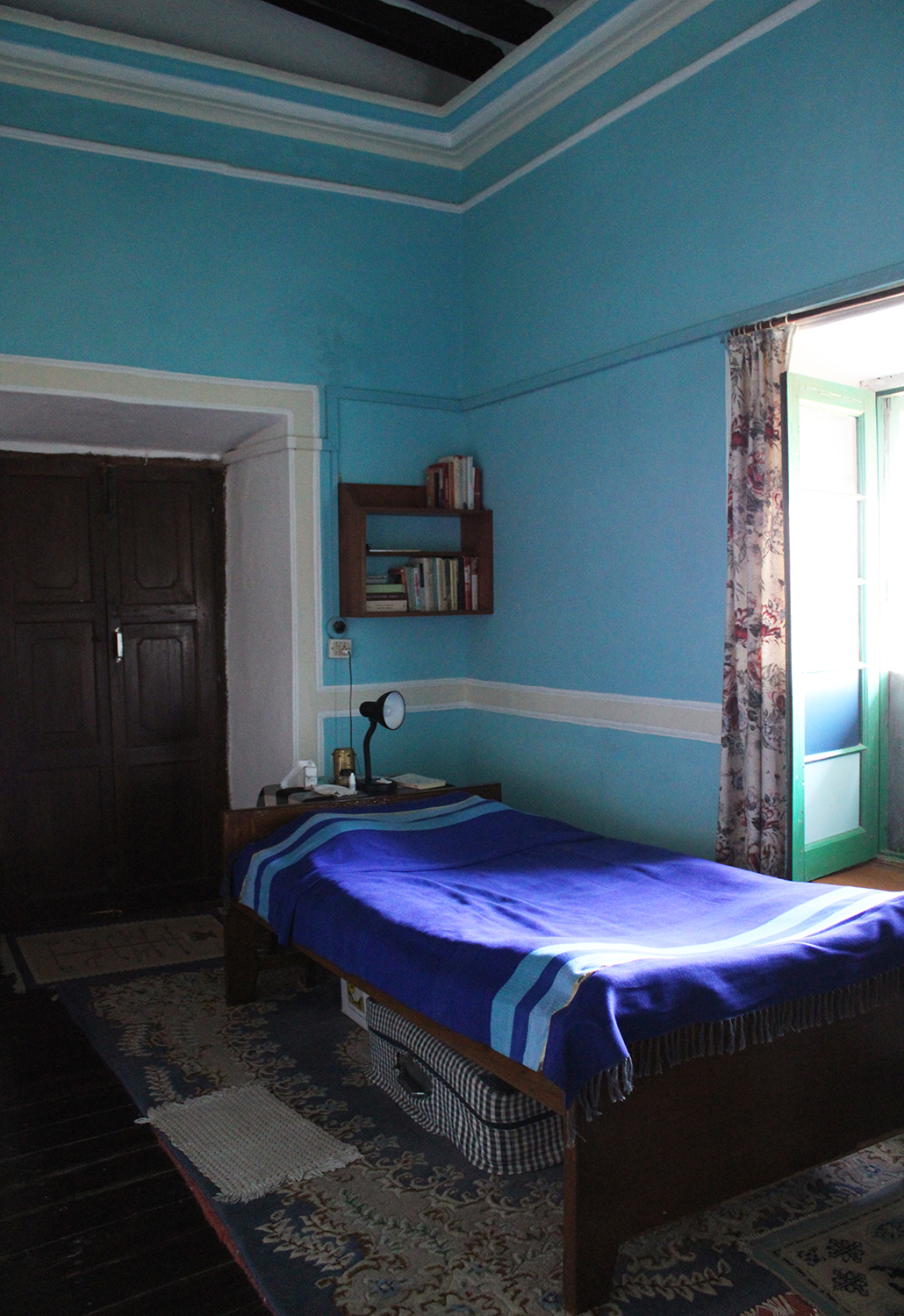