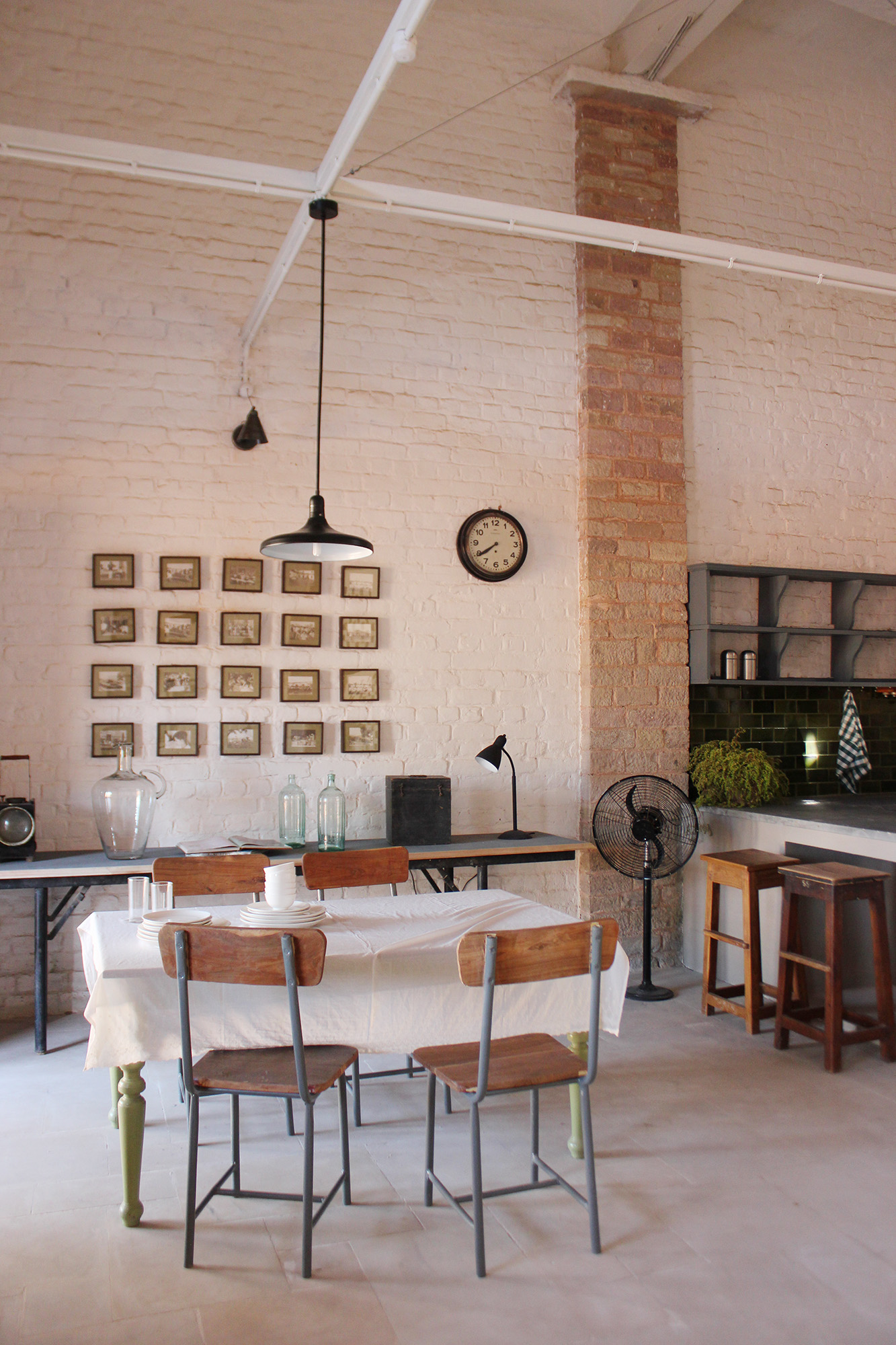 In The Human Zoo, published in 1969, zoologist Desmond Morris  famously stated,  ‘The city is not a concrete jungle, it is a human zoo.’ Humans, he argues, are tribal by nature and that the crowded, modern cities that we live in are not our natural habitats. ‘Like the human zoo, the animal zoo provides its occupants with the security of regular food and water, protection from the elements and freedom from natural predators. It looks after their hygiene and their health.’  Nevertheless ‘Even if they are provided with perfected balanced diets and are immaculately sheltered and protected, they will become bored and listless and eventually neurotic.’

The modern, rapidly changing Indian city and the experiences it aims to offer are not different from what Morris describes. The Indian city now  aspires to be ‘world class’ –immaculate & super organised and is not considering the sterility that accompanies this change. This blind pursuit has resulted in an ever growing, unplanned expanse of concrete that has consumed agricultural land, wetlands, forests, historical towns, villages, traditions, communities and everything else in its way. Out of context  towering apartment blocks, diminishing green spaces, fresh air and water are casualties of this haphazard growth and thoughtless imitation. Ironically, this same  indiscriminate development that first killed a sustainable lifestyle, natural to the Indian way of living, now touts sustainability  as necessary to our survival. Heritage has also been a casualty of this brute force. All around us we have seen the callousness with which older structures are demolished. And while the reasons for demolishing an older building are many and at times justified, often an older structure can be comfortably adapted to modern day needs with but a few modifications. This is called adaptive reuse  in architecture the examples of which are many in Indian and overseas. The project in this blog post is also an example of adaptive reuse. 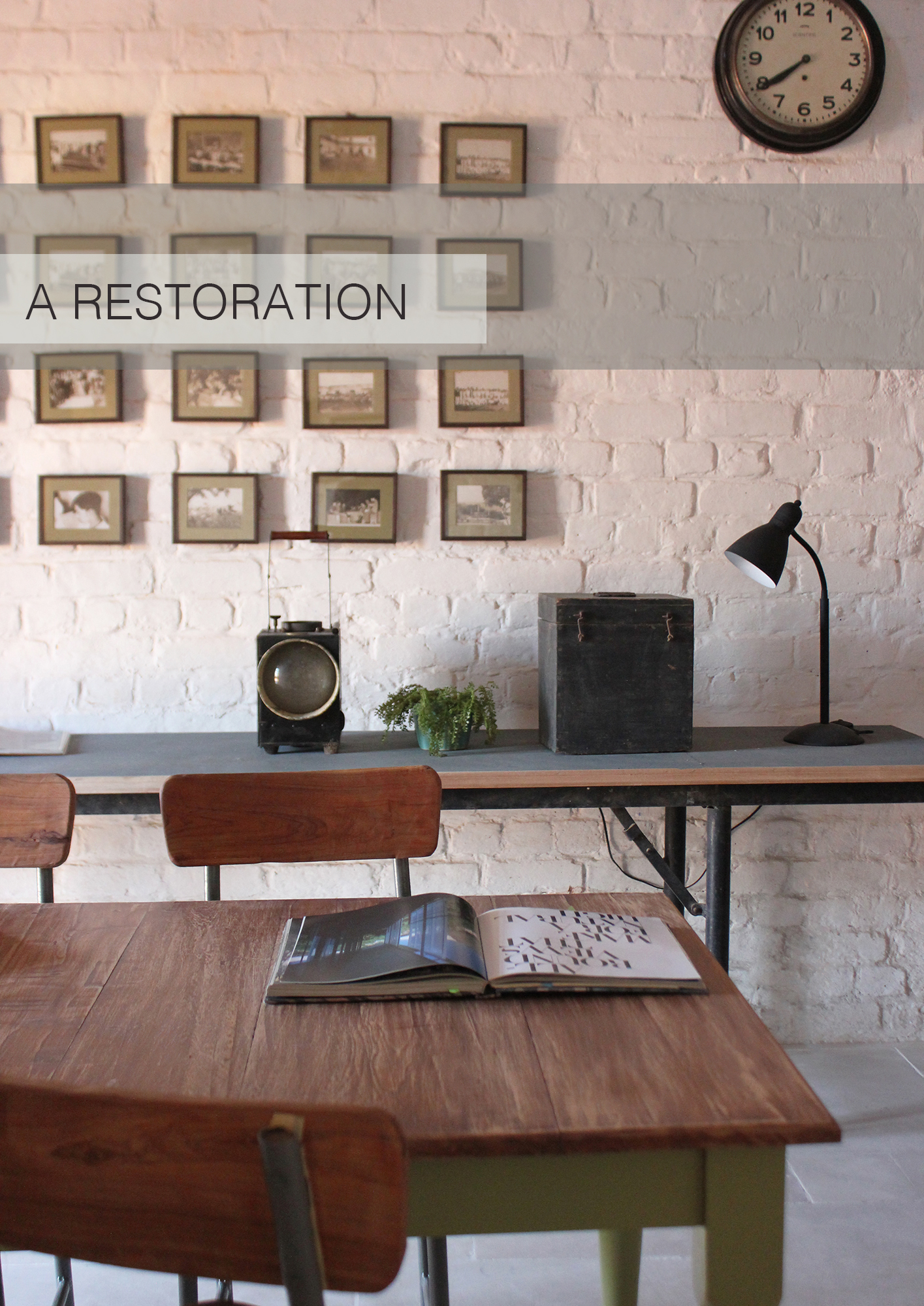 The project featured here in Scindia school, Gwalior was published online last year by Elle Decor, India. I speak about restoring it and our practice on The Malba Project this week. It is an example of a building that we adapted to the current day needs of the school. The building site was originally built as an ammunition depot by the British and constitutes a fine example of British military architecture built with the local Gwalior sandstone- ashlar masonry facade. The building was later used as classroom units by the School and then lay abandoned, providing an excellent opportunity for its adaptive reuse as residential apartment units for the young women school staff.  The project was implemented under the School’s general allocated annual maintenance budget which prompted a different approach to design than we employ on other projects.

The bulk of the furnishings were either recycled or refurbished from the School’s inventory of discarded furniture and old stock of goods. This involved refurbishing salvaged furniture found in different store houses around campus. Many of these pieces lay unused for years and were in a bad state of disrepair. We found dozens of old wood and iron classroom chairs that were repurposed to be used as dining chairs and wood stools as kitchen counter seating. We salvaged wood from worn down cupboards and reused it for making kitchen shutters, beds and centre tables. The sofas and side tables were sourced from scrap shops in Gwalior and Delhi– fixed and reupholstered with cotton fabric.  The stone for the floors was locally sourced. We found a dozen old ceiling lights in a store room and had the ones that worked placed in the dining areas. Old school switches and sockets were found in the local market. Headboards of beds were made on the instant from slabs of lattice cement railings that we found being used to build a wall on another part of campus. Another headboard was creatively constructed from an old balcony railing. For art, we used images from the school’s library or printed contextual images from archives. The picture frames were of  wood, again sourced from scrap shops in Delhi. The backsplash tiles in the open kitchen were handmade in Daryaganj, Delhi- the colours of each determined the simple colour schemes for each studio. All the interior design elements, handmade and recycled fit in beautifully with the carefully restored space and not just aesthetically, but also with the theme of restoration and adaptive reuse that this project represents.

If you’re thinking of tearing down an older house because of maintenance issues, you might want to consider modifying it instead of replacing it. A conservation architect with a sensitive approach to conservation could bring a fresh perspective to the redesign of your space.  You could also consider refurbishing your existing furnishings and seek the assistance of an interior designer. We offer both services and will be happy to answer questions or offer a consultancy. Please email [email protected] if you’re interested. 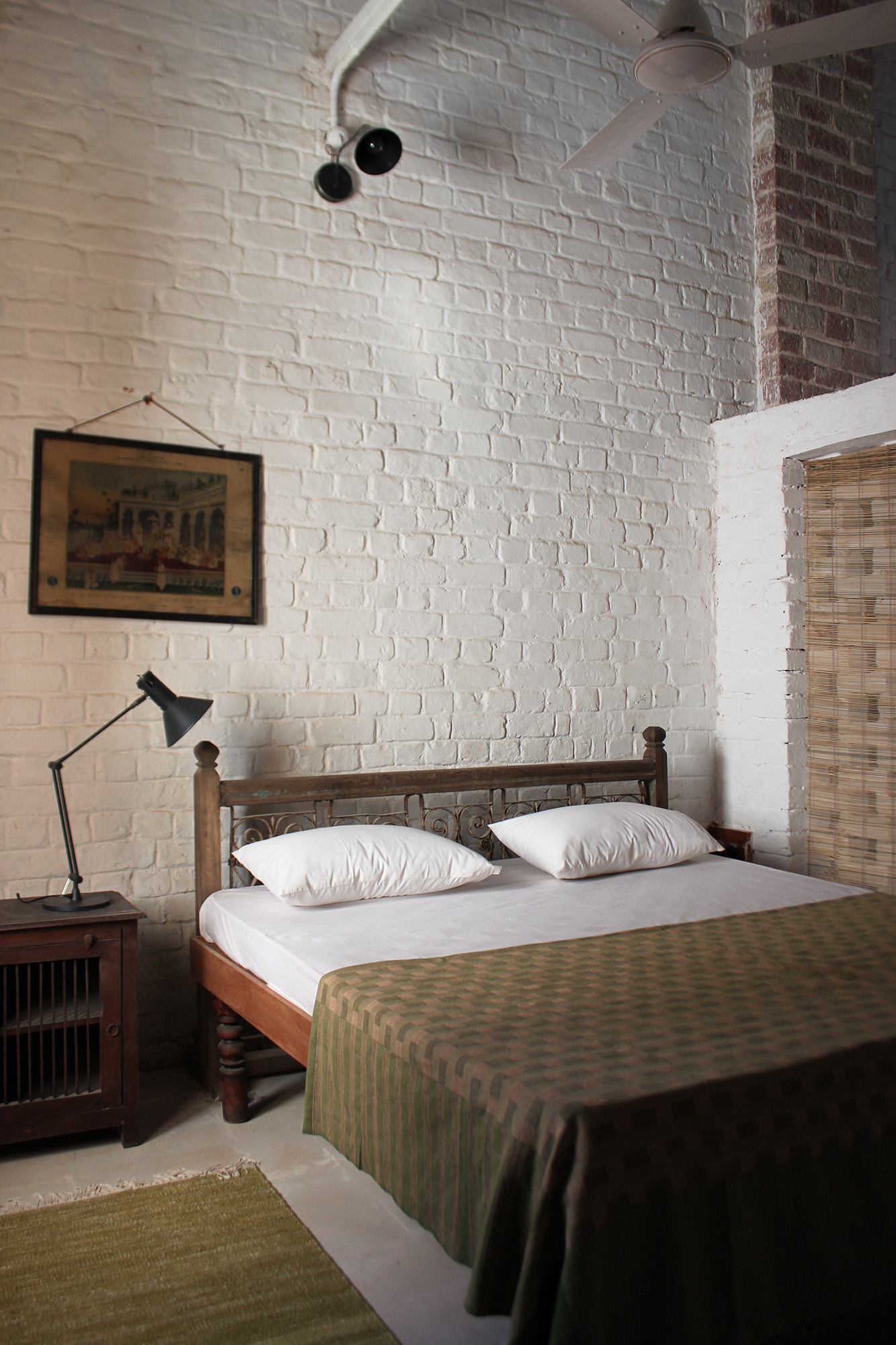 The bedroom in one of the restored studios. The headboard is an old partition that we refurbished. The art was found at site as was the side table. 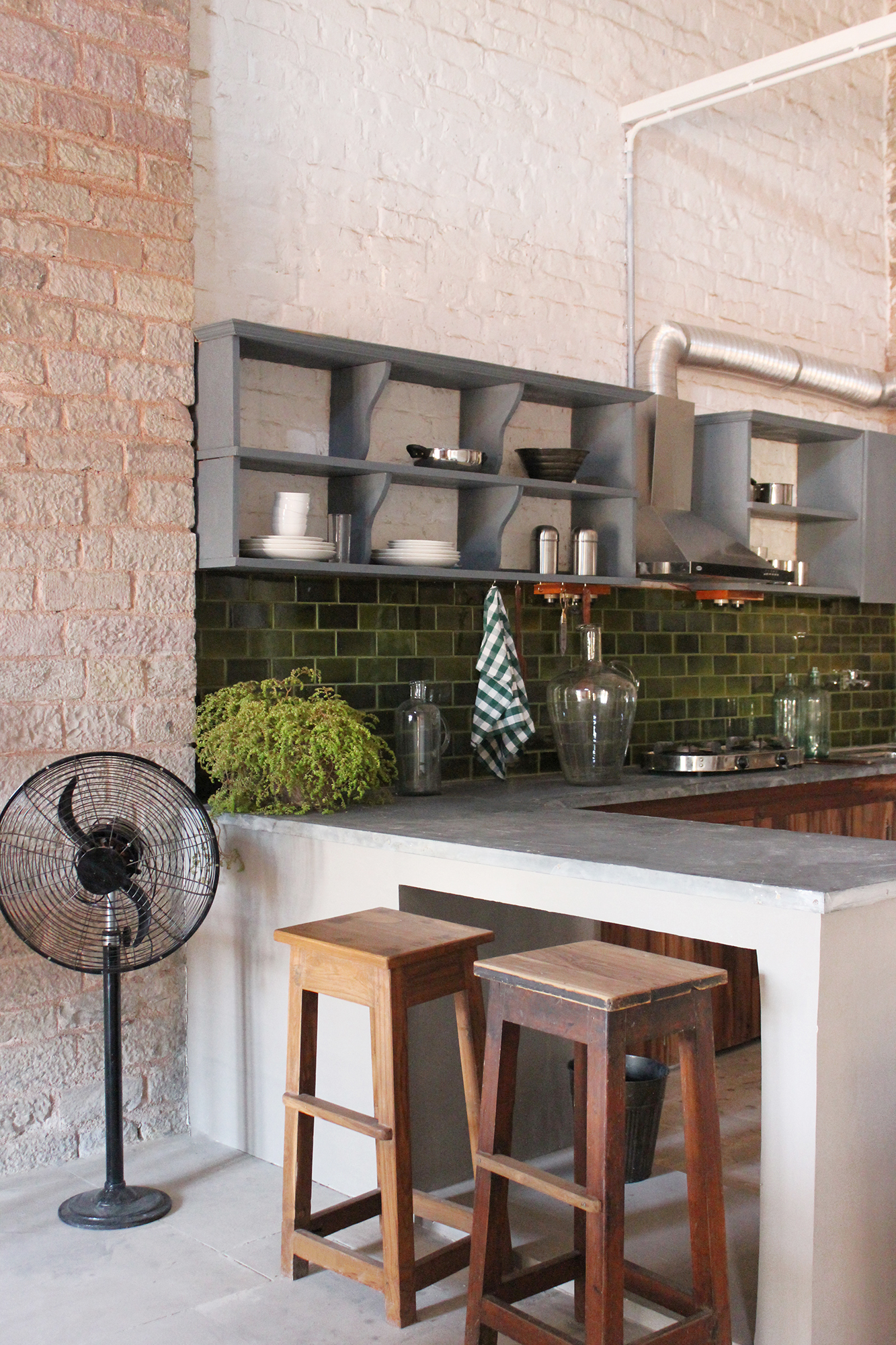 We designed the open kitchen shelves to go with the overall aesthetic of the space–simple and unfussy. The counter stools were found in a store on campus. The counter slab was an old piece of discarded Kota stone that was given a new life.. 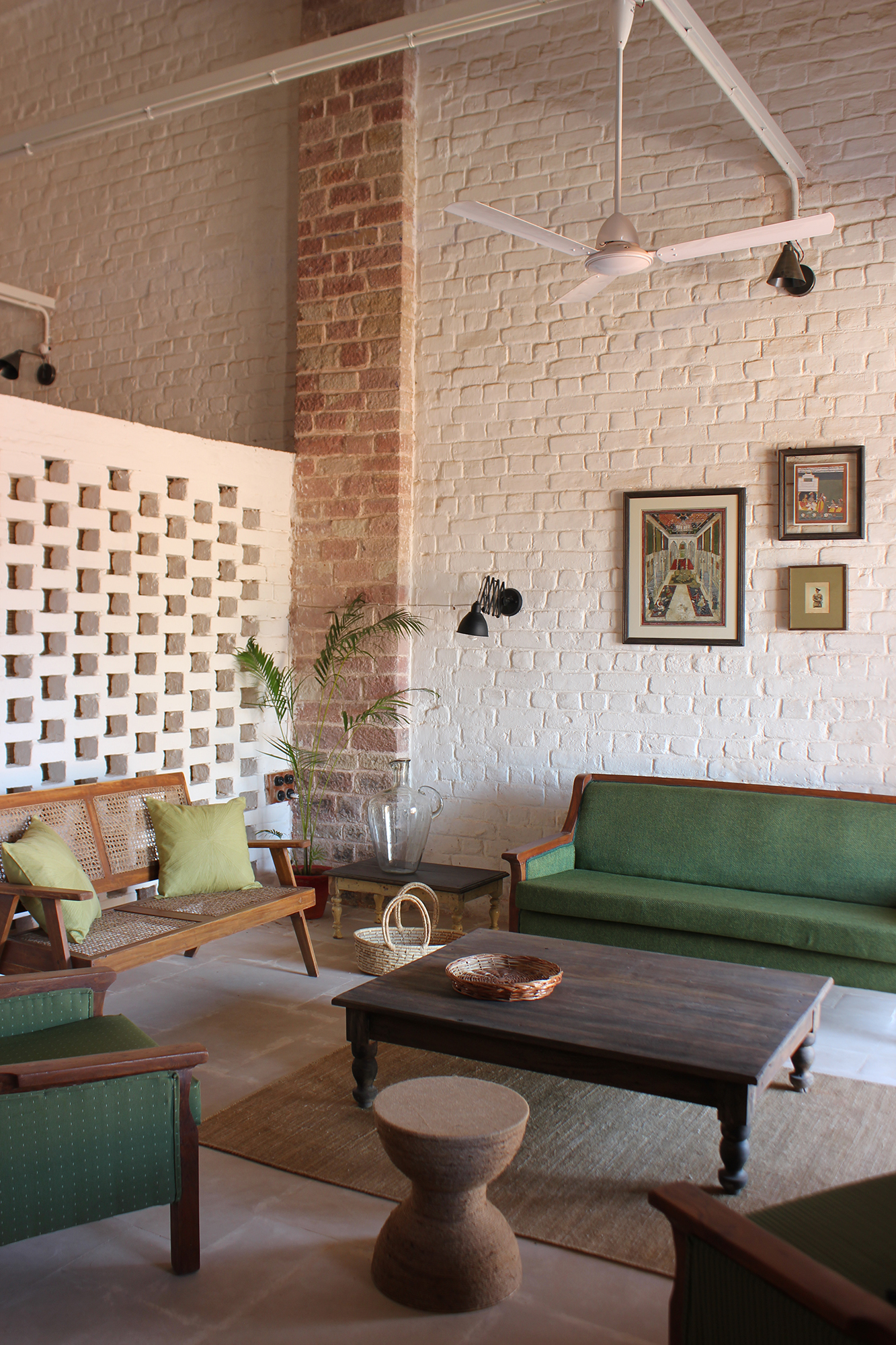 The low centre table was designed by us and made at side with old wood we found at the store. The seating was sourced from a thrift shop. 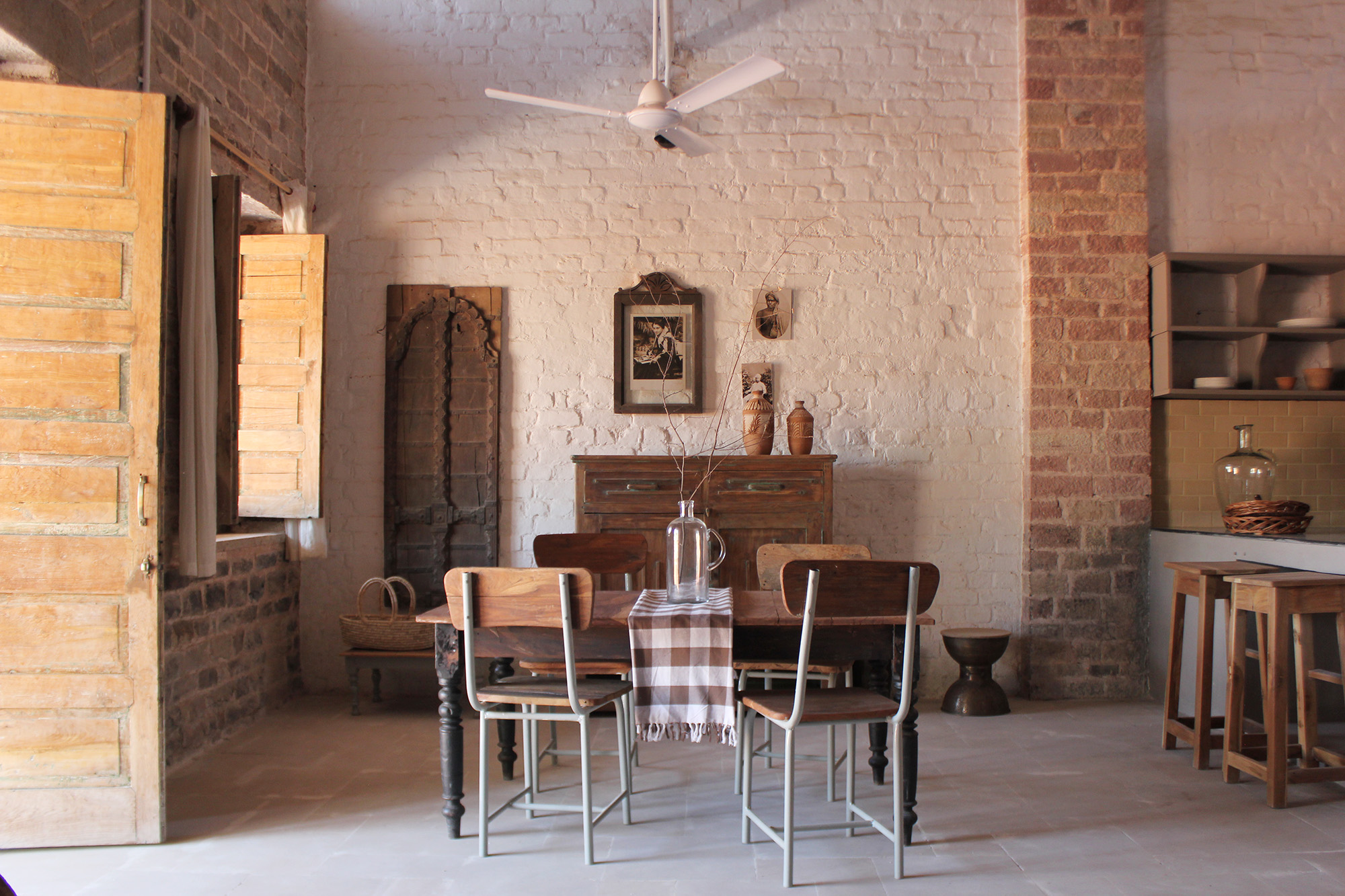 This is the dining space of another studio. All the furniture was found at site, discarded for many years in a store. The dining chairs had previously been used in the classrooms of the school. 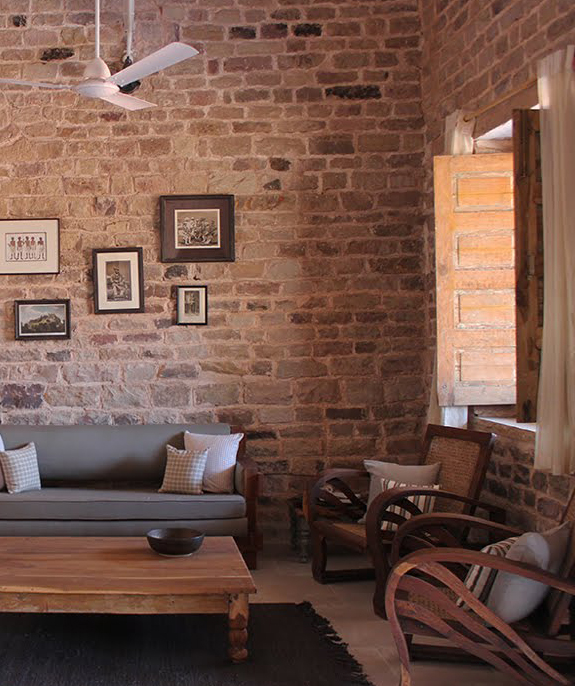 In the sitting area of the same studio, you can now  see the original exposed masonry of the walls 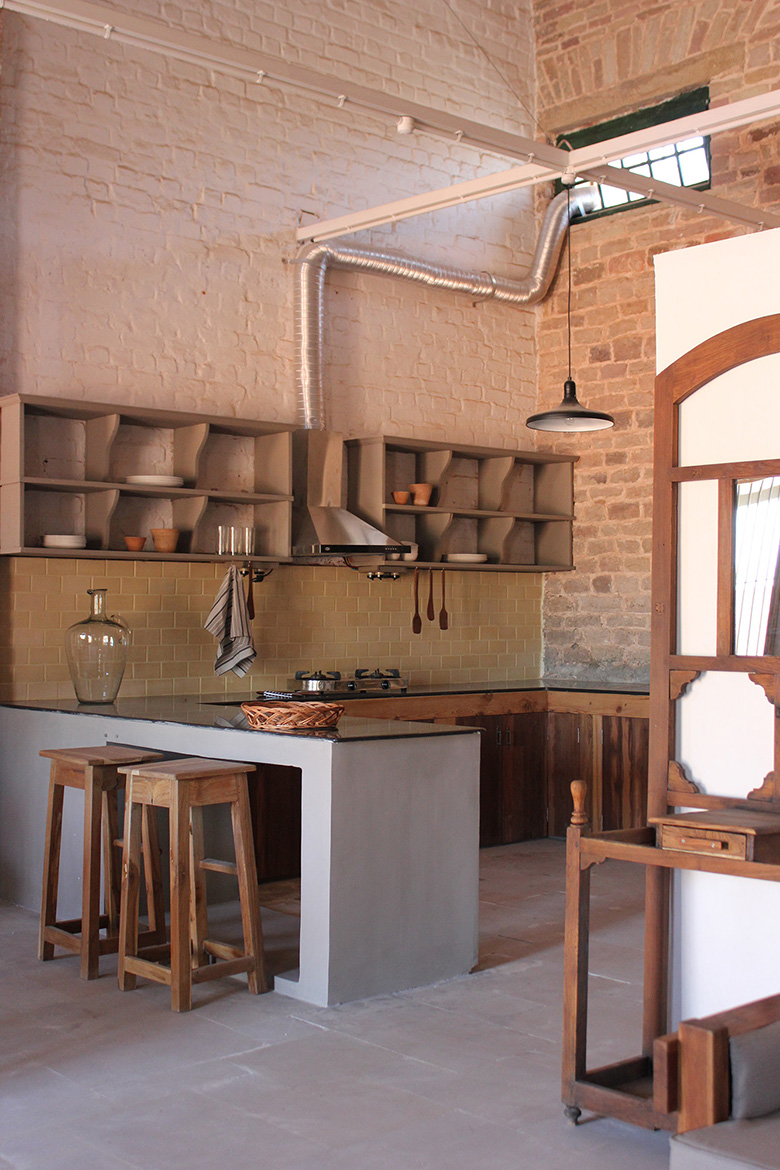 This is how all the kitchens in the space look, except for their colour schemes. The wood on the shutters was found discarded at site. 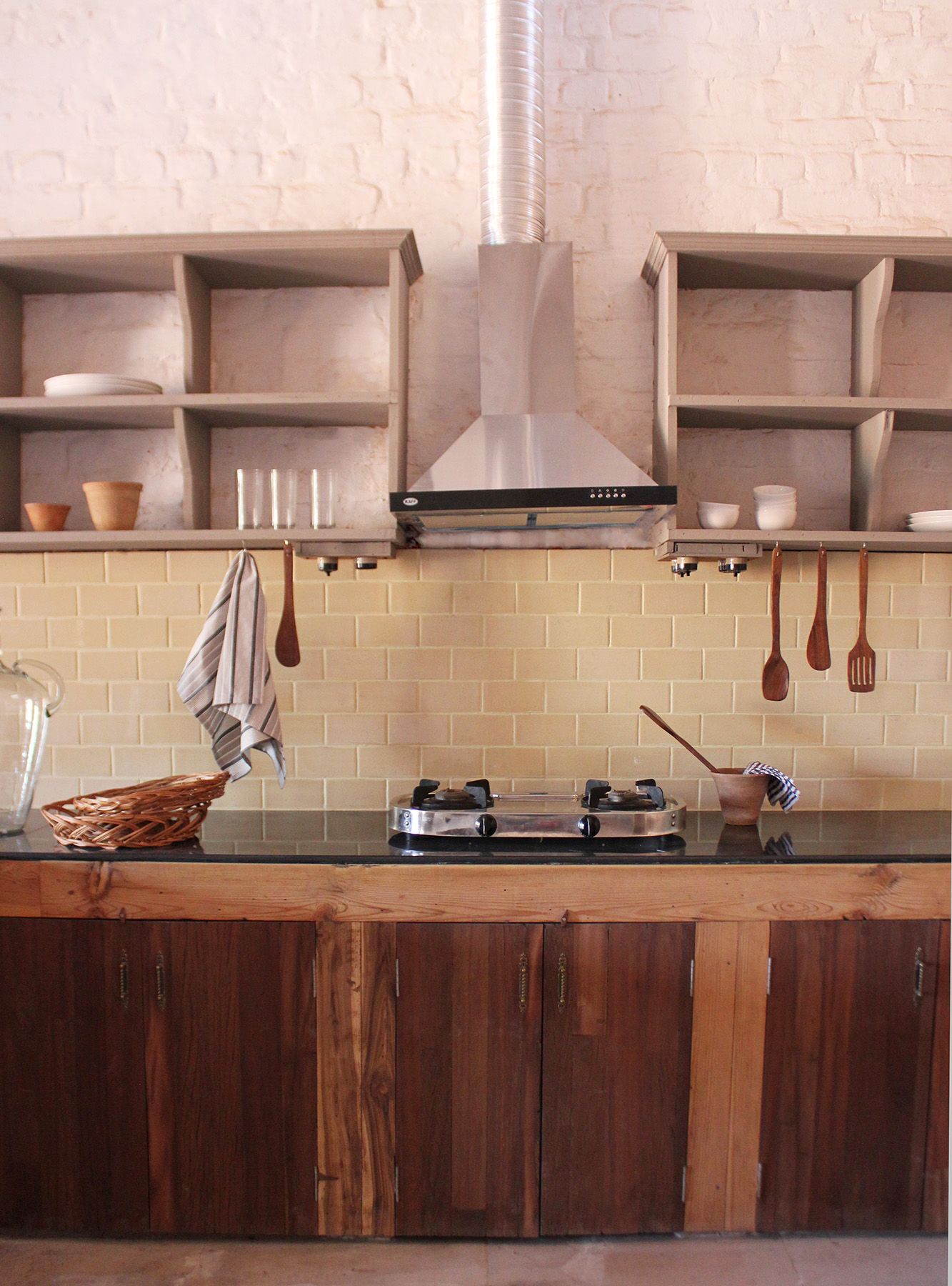 The handmade tiles we chose were perfectly suited for the other natural finishes used in the space. We chose one colour for each studio 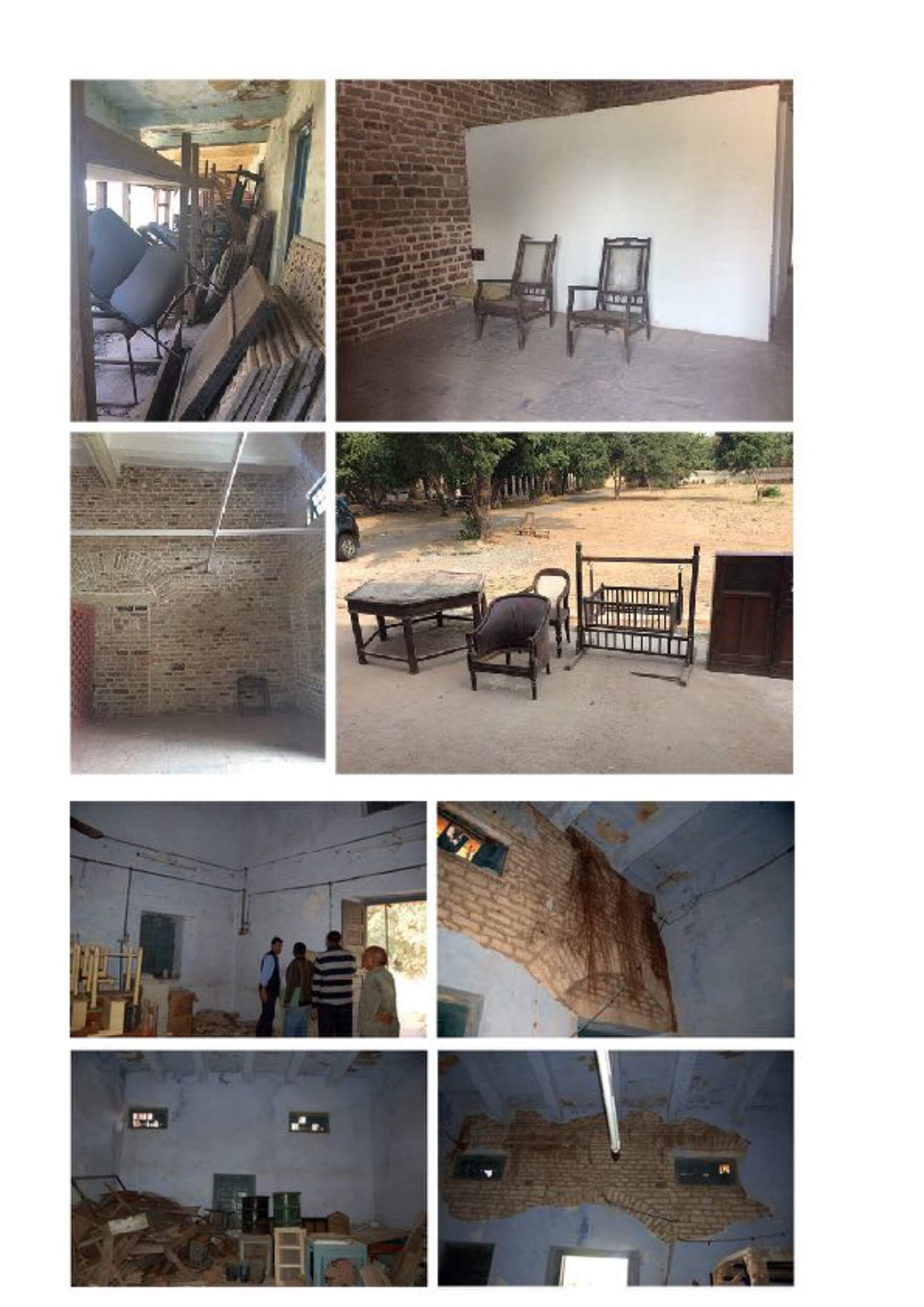 Decorating a Barsati in Delhi